The action of last season’s marlin expedition in Baja California through the eyes of one of our guests. Read all about Ellen’s experience above and below the water last November in Magdalena Bay with Dive Ninjas.

Looking down from the plane window, I saw the edge of the world.  Miles of desert meet the mountainous coastline which cascades down to strips of white sand beaches just before the deep blues of a vast expanse of ocean.  I was in love with this wild coastline before we even landed in Los Cabos International.  The next day, we met Jay at the Dive Ninjas shop, where we loaded the gear and delicious snacks (Costco cookies anyone?!) into the spacious van and headed to Puerto San Carlos. Along they way we spotted osprey perched in their nests a top every phone pole coming into the small village. Just in time for a gorgeous sunset over Magdalena Bay, we settled into our Bed and Breakfast where we met Pinta the hotel dog aka the #SavetheMarlins mascot. Regi and Jay gave a presentation, relaying the history of ecotourism in Mag Bay, how the #SavetheMarlins expeditions came about, and how best to interact with these incredible “super fish” that we would be encountering the following day. 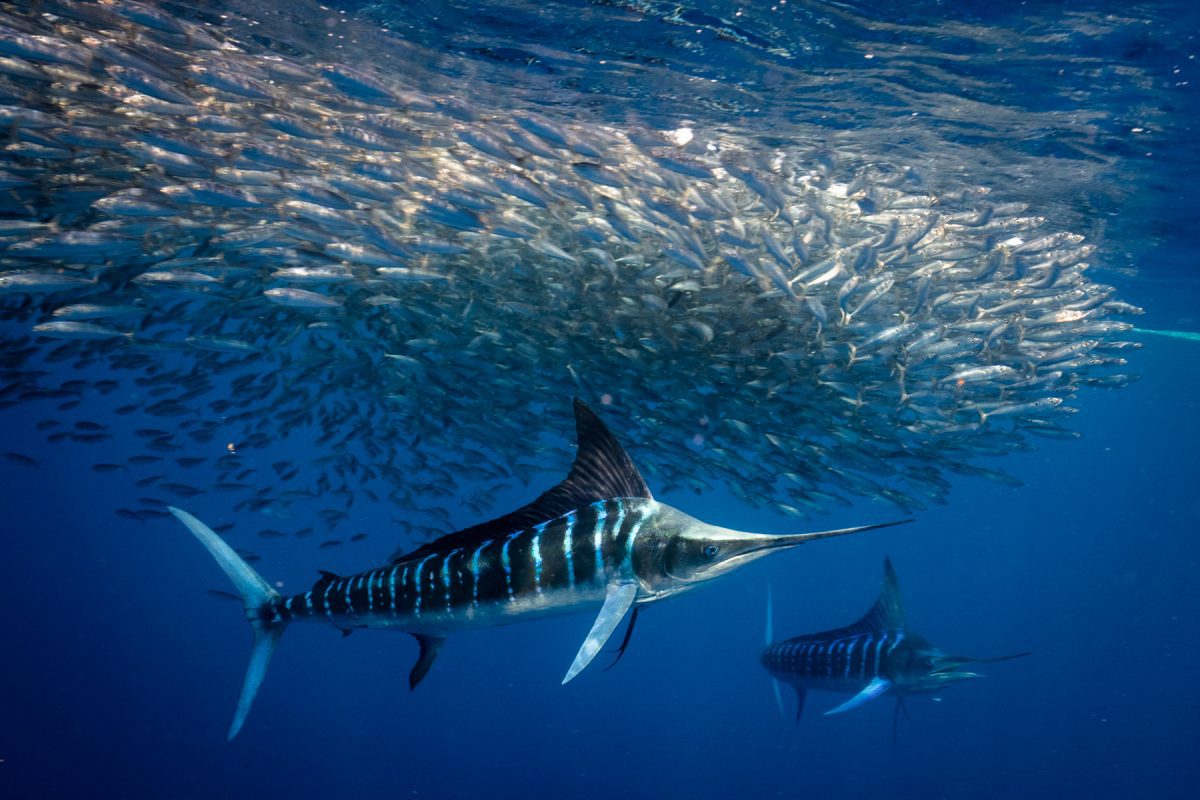 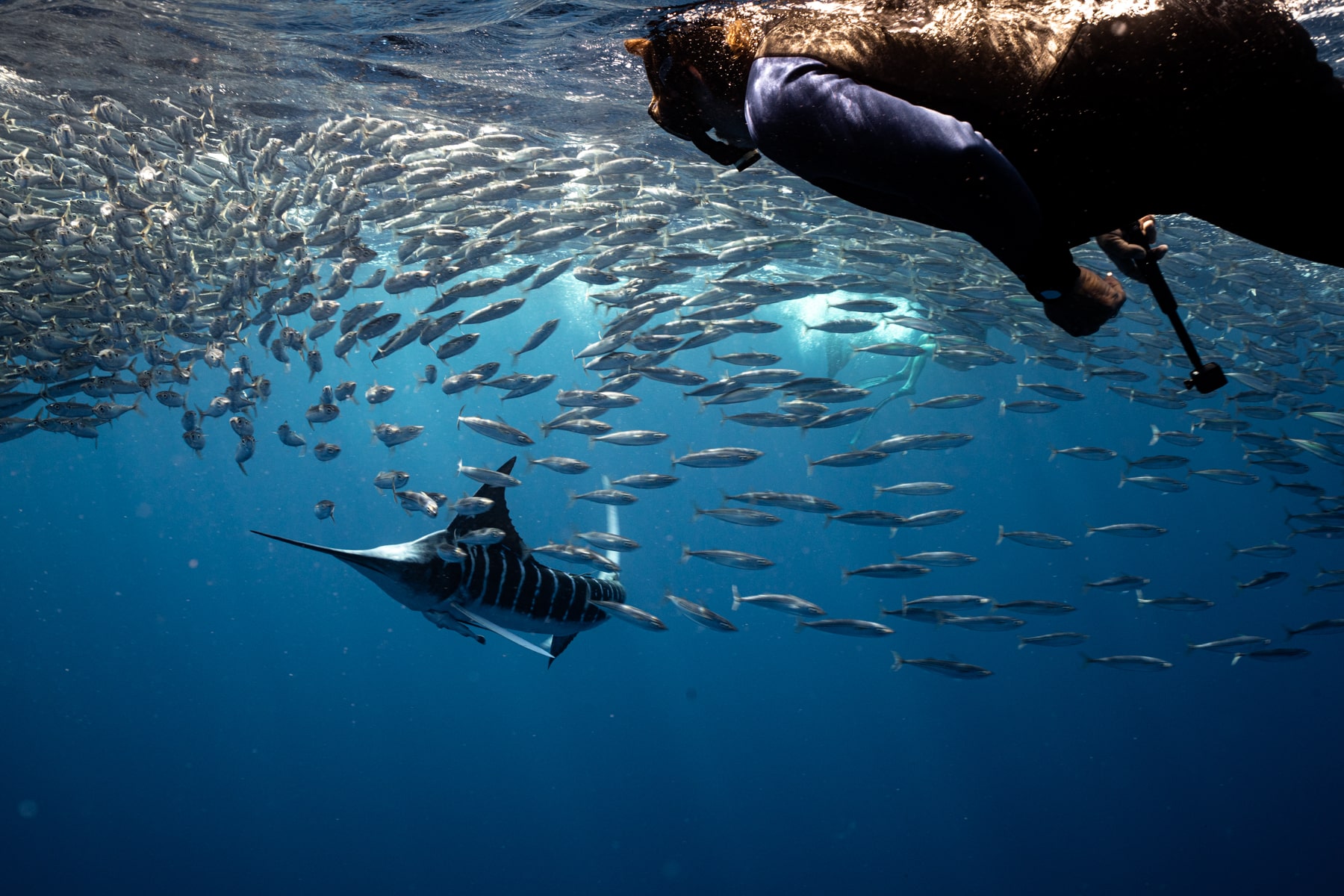 And were off to find some Marlins!

The smell of coffee permeates the air as the sun climbs higher in the pink sky. After breakfast, Alfredo meets us with the van and takes us over to dockside. Captain Mele welcomes us onto his panga. He is wearing a red flannel with white waders, and his skin is tanned from the sun and salt.  The only ripple in the water was the one from our boat motoring out of the bay as the sun climbs higher and higher. The birds awaken and fly over our panga in search of breakfast, the glassy water reflects the rising sun and Regi is at the bow of the boat building the anticipation and of course taking first day selfies with our little group.  Jay helps us wanna-be ‘photographers’ prepare our camera set up and Captain Mele navigates us through the stunning mangroves into the wide open ocean.  The simply built fiberglass panga is just spacious enough for the eight of us with cushioned rows of seats and a 360 view of the Baja Mountains colliding into miles and miles of endless blues. It is a fairly smooth trip out as we watched the sea lions doing their morning sun salutations, and spy-hopping our boat as we speed away further and further from the coast line.

After a couple of hours waiting, snacking, and looking for clusters of sea birds on the horizon, we found them! As we approached, a tornado of frigate birds hovered as marlin fins sliced the surface. “Vamanos, Vamanos!,” Mele shouted with excitement. We quietly slid into the water and BAM! It was like falling right into a scene from Blue Planet.  Fifty plus marlins rush by 10 feet below us, closely followed by a squad of sea lions.  We swim after them to find a bait ball the size of a building, malleable and metallic, shifting about in the water column like a cloud as the mackerels try to stay in the center to avoid being skewered by the predators’ swords. After spending hours coercing these little fish up from the depths the Marlins feed at will, changing the color of their stripes from blue to white to purple and back again as they hunt. In just one field of view, I can see 12 marlins on the outskirts of the bait ball as 4 sea lions dance in the middle, splitting the metallic cloud briefly before it melds back together. They seem to have an unspoken truce that allows both species to work together trapping the bait ball and then taking turns hunting in it. However, I watch as a marlin snags a fish on the outside, but it’s not his turn yet. The sea lion chases him down and steals it off of his sword! The water is a clear dark blue for as far as the eye can see, except for the flakes of fish scales and flesh floating close to the surface. The most beautiful murder I’ve ever witnessed! It’s life and death and years of evolutionary adaptation culminating into a ballet of the open seas.  After we can no longer keep up with the fleeing mackerels, Mele picks us up, carefully taking our camera gear, and helping us into the panga. Some of us are dead silent, some of us are screaming, and some are crying.  Nevertheless, we can’t believe what just happened. Our brains cannot keep up with what our eyes just witnessed to put it into words. We take water temperature and salinity measurements in the areas that we find the most marlins. We record their location, in hopes to add to the data Regi has already collected to better understand their migratory patterns. After dropping in on a few more marlin surrounded bait balls, we head in for the day. 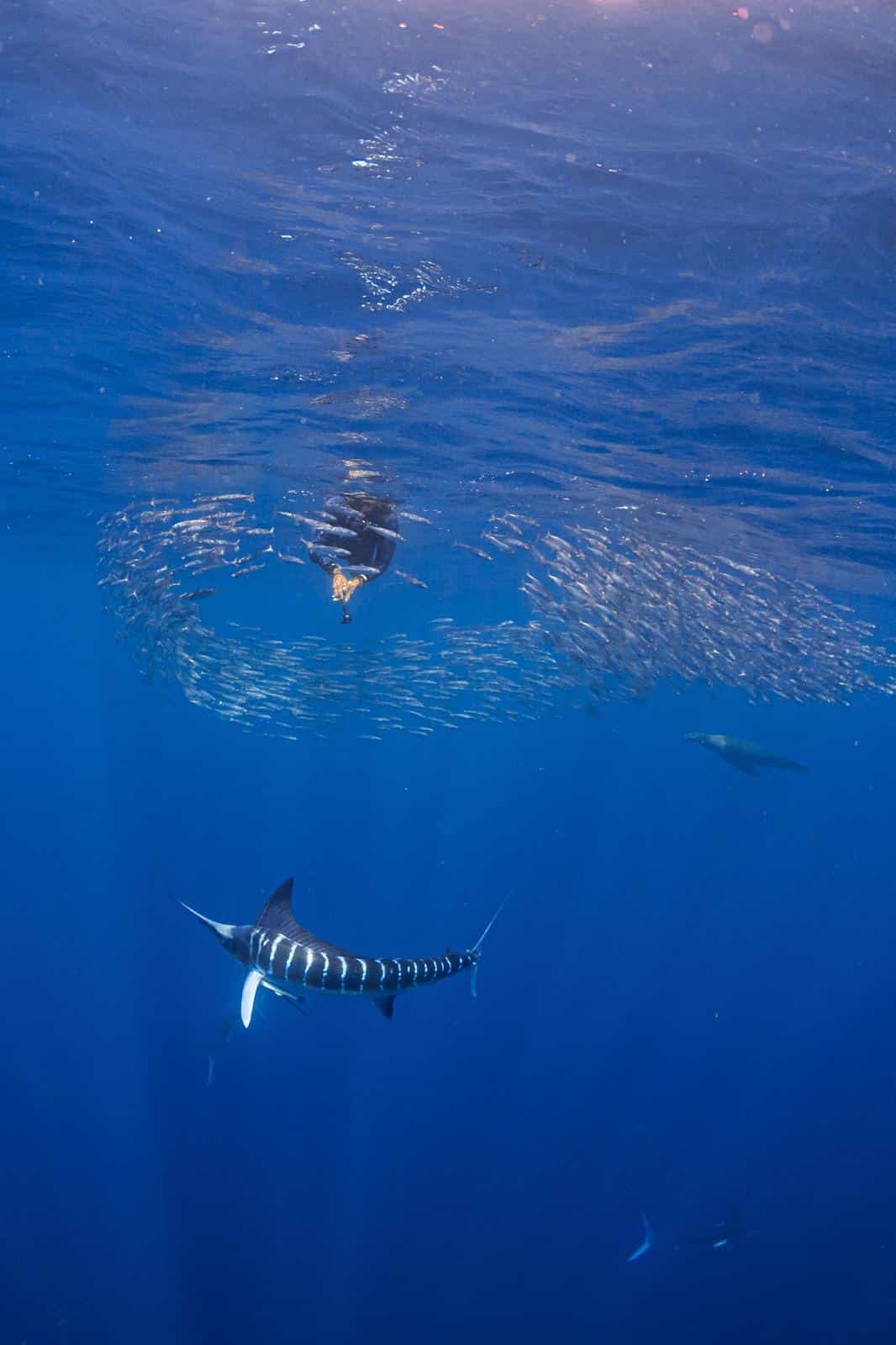 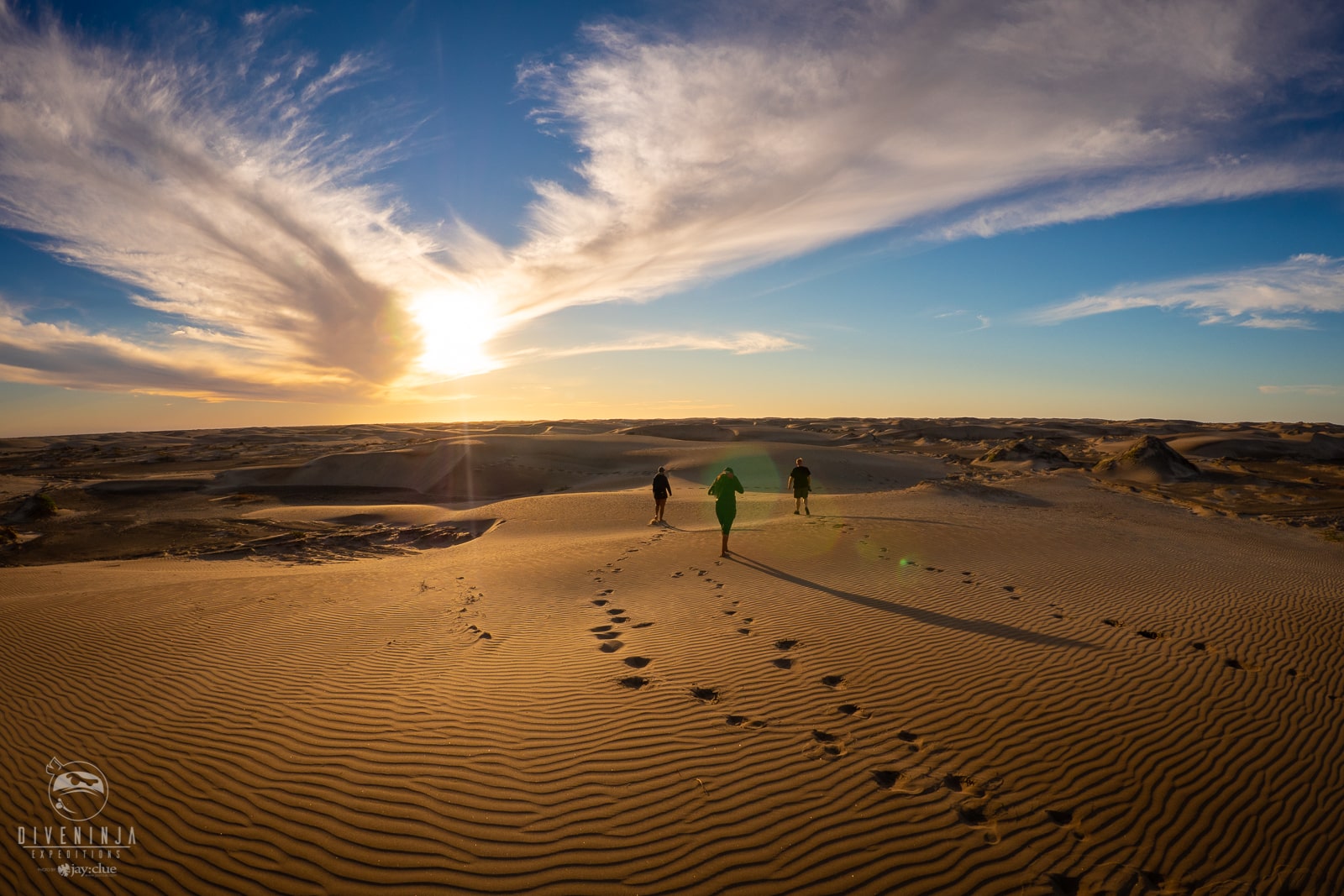 On the way home from the Marlin action on the second day, we made a detour to an area of protected mangroves just outside the bay. A huge pod of dolphins surrounded us as they were hunting in the shallow sandy banks. We watched from the boat as this family of dolphins came right up to us, each making brief eye contact before dipping just below the surface again.  Then, we arrived at the mangroves.  The water turned dark and brackish, contrasting the bright green leaves of the mangrove trees with roots twisting into the water like a  bouquet of snakes. I though about what Jay told us of the ecological importance of this area, and all the baby sharks, fish and birds it must provide a safe haven for. Our boat slowly motoring the snaking waterway and birds rustling around in the trees were the only audible sounds for miles. We saw all types of Herons, and Turns, and even a few Albatross lurking about.  Suddenly, the rainforest of green was intercepted by a desert of sand. The topography of this place was simply surreal. We saw mountains, desert, ocean, and mangroves all in a stretch of a few miles. It was like something out of Peter Pan, and it turned us all into kids again once we stepped off the boat. We were tracking coyote prints, rolling down the dunes, running along the tops of the sand slopes. Now, looking back,  all the pictures I took simply don’t do the place justice. As if the day couldn’t get any better, we spotted a juvenile humpback whale tail lobbing just inside the bay on the way home.

Our last day, unfortunately the wind picked up; but, fortunately there is just so much to do and see in this area! Mele took us out cruising around the inside of the coastline protected from the wind. It was like an artist poured rock from the sky that fell into the ocean, bounced off the bottom and rose up again in the most beautiful pinnacle formations painted in red and green algae. This rugged coastline alone was worth the trek, not to mention all the creatures it inhabits. We looked for whales, but found mobula rays breaching out of the water like flying pancakes, a few almost landed in our boat! Dolphins rode the bow, as Captain Mele pointed out a total of 4 bald eagles perched on the rocks above us.  Sea lions posed on the rocks, and a few brave ones even swam up to check out our boat.  A land ferry, aka a truck with a trailer, came to carry us across the long stretch of peninsula and we didn’t even have to get out of the boat! As we rode in the boat on the back of this truck, Regi spotted a coyote hiding in the dunes. We were dropped off on the other side of the bay where we visited a local shark fishing camp. Although, I once thought of them as the enemy, I now see them as the victims of circumstance that they are.  The conditions in which they live are appalling and dangerous.  Dive Ninja Expeditions and Nakawe Project joined forces to create Nakawe Ninjas: a platform that works with the local fishermen trying to establish an alternate source of income within the ecotourism industry, in hopes that one day they will move away from shark fishing altogether. We headed back to the hotel as the sky turned every shade of orange, purple, and pink. As was tradition, every night we gathered in the hotel restaurant for a presentation. Regi taught us all about the threats to the Marlins and what the #SavetheMarlins Campaign plans to do about it. After seeing such beauty and tragedy juxtaposed in a single habitat, it was refreshing to hear her solutions and future hopes for this area. 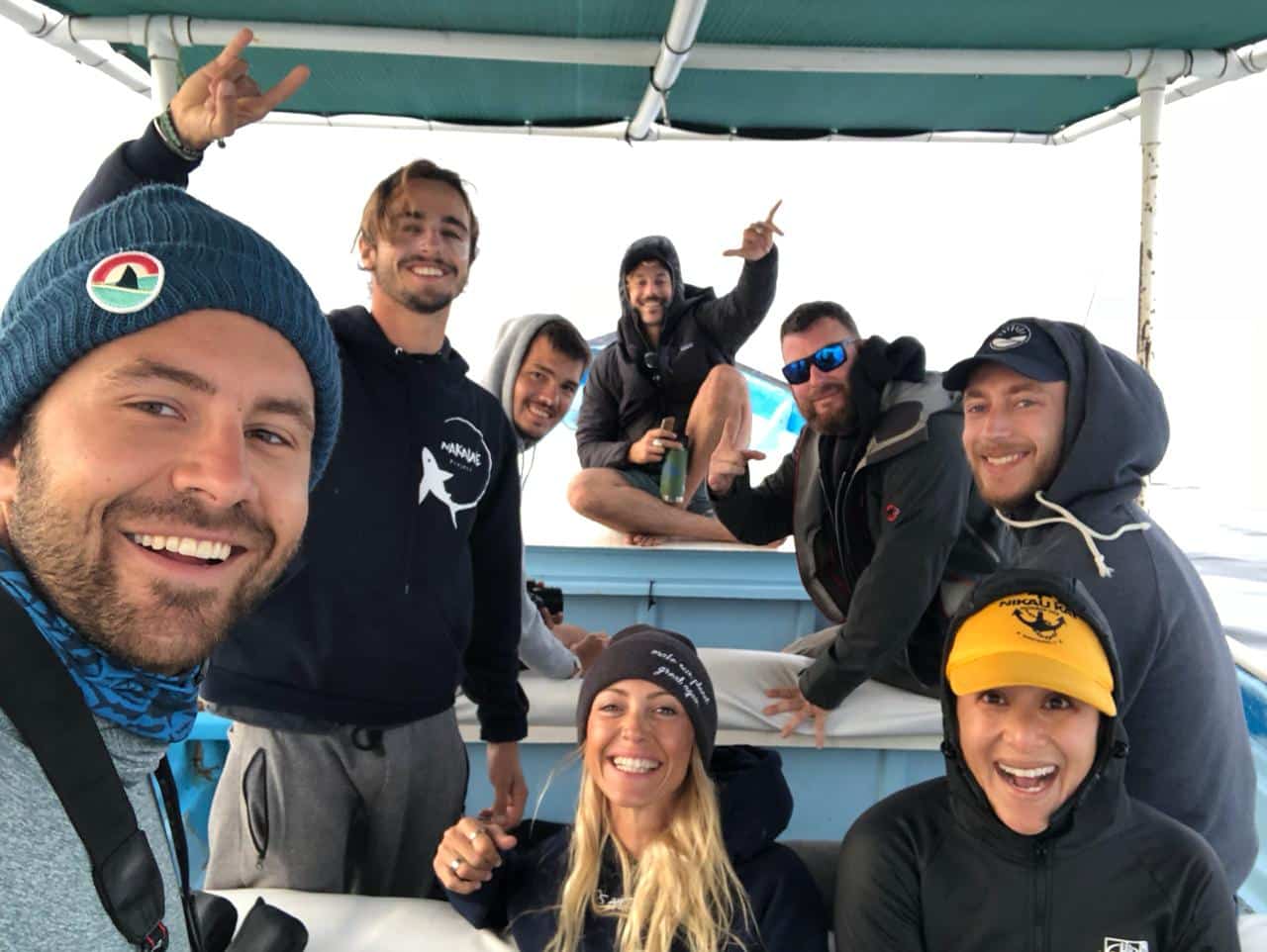 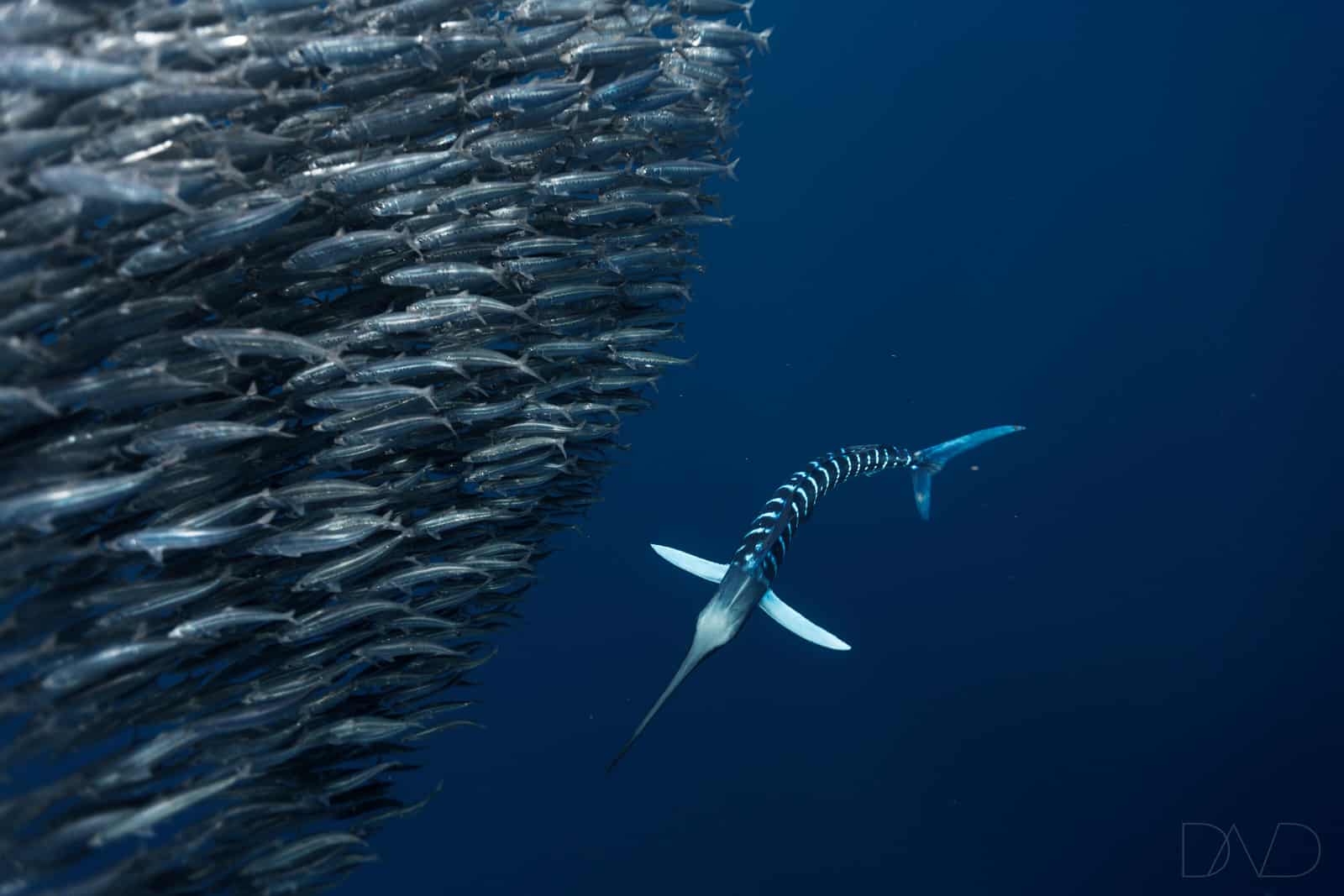 I’ve dived with sharks all over the world, but nothing compares to the excitement of a 125 lb Marlin moving at speeds of 50 mph piercing mackerels from all angles as sea lions dance around the largest congregation of synchronized swimmers that I have ever seen in my life.  You actually feel like you are part of the high speed chase that is unfolding right in front of your eyes. Best of all,  it is nature in it’s most pure form. There is no store bought chum, or flying drones to spot the action; just 9 pairs of eyes scouring the horizon completely exposed to the elements in an old-fashioned panga 30 miles off shore in 2,000 feet of water. It just doesn’t get more wild than that. There are so few places left in the world unexploited by humans that you can experience mother nature’s magic in such a pure form with like-minded conservationists such as Nakawe Ninjas. I thought I would have to be apart of the BBC film crew to ever witness something like this in such a remote area;  it was surreal to be able to come out here with Jay and Regi and see it with my own eyes.  I love that they only work with local captains, restaurants, and drivers. You truly get to know all the critters that inhabit this magical place including the humans! 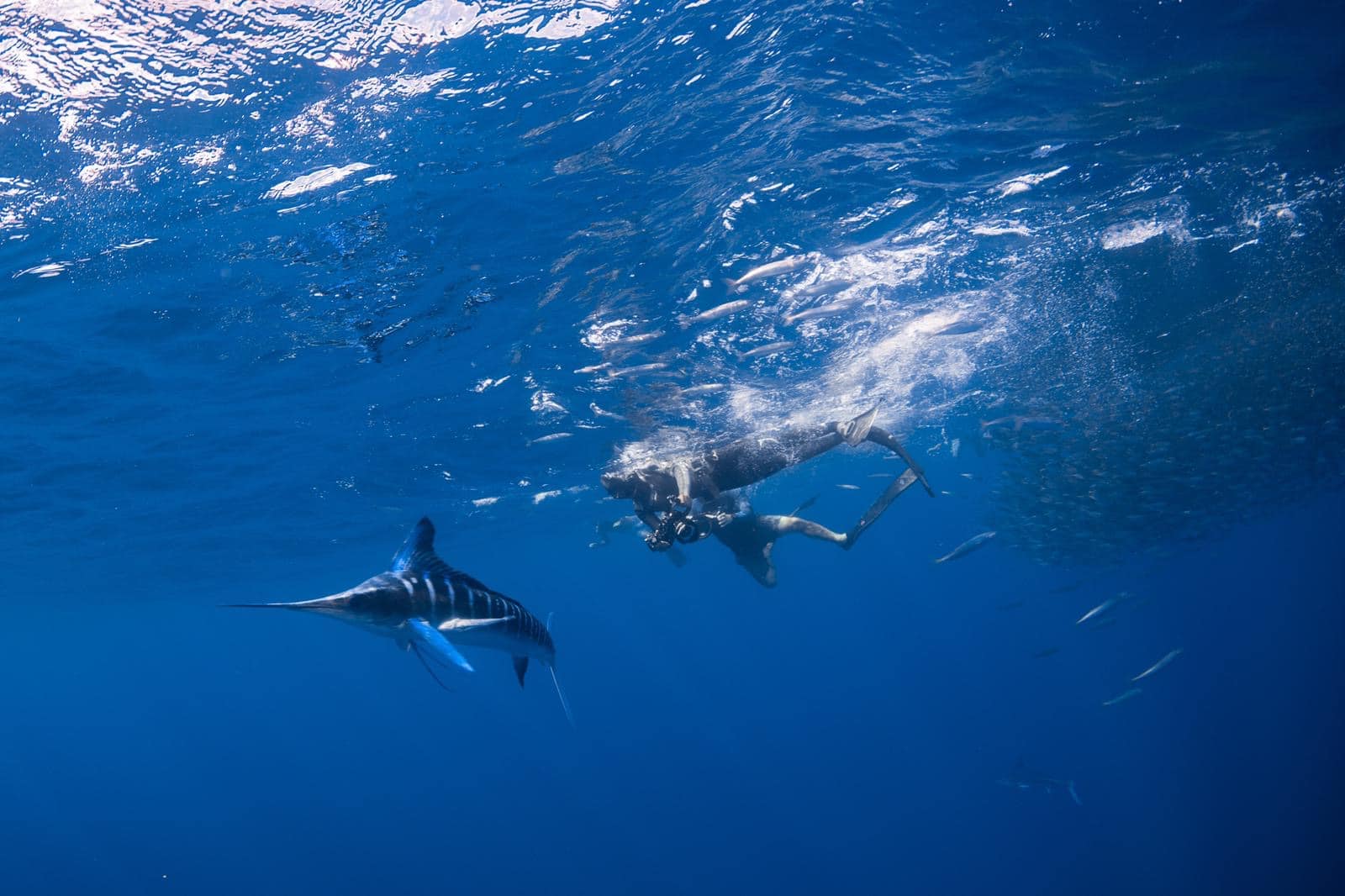 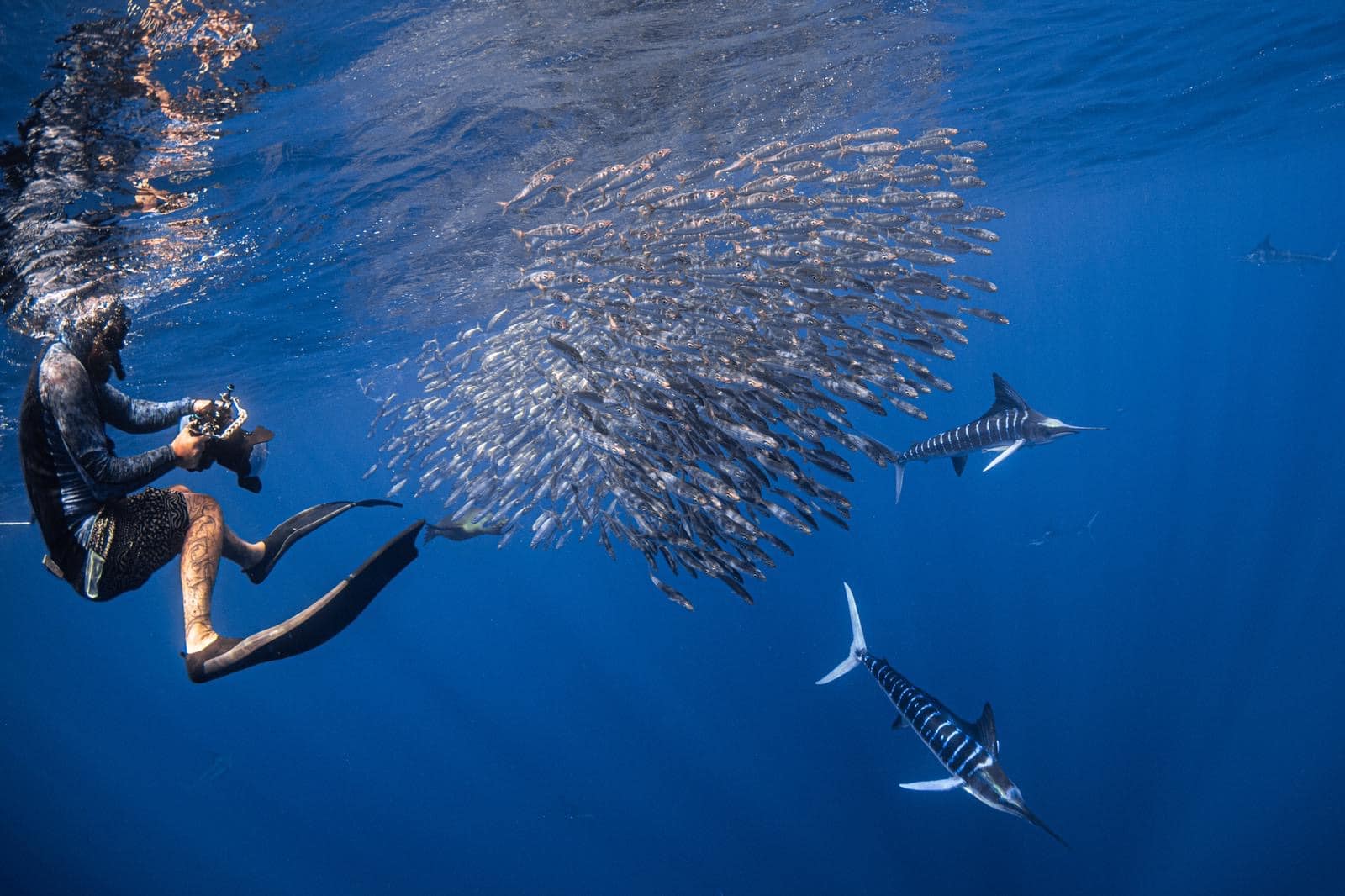 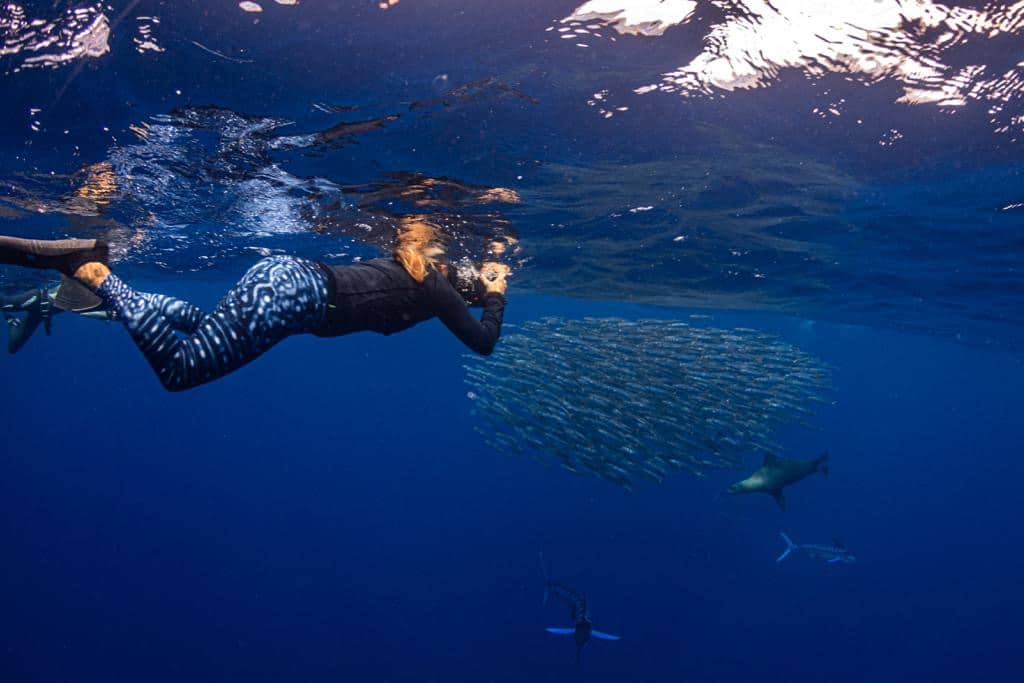 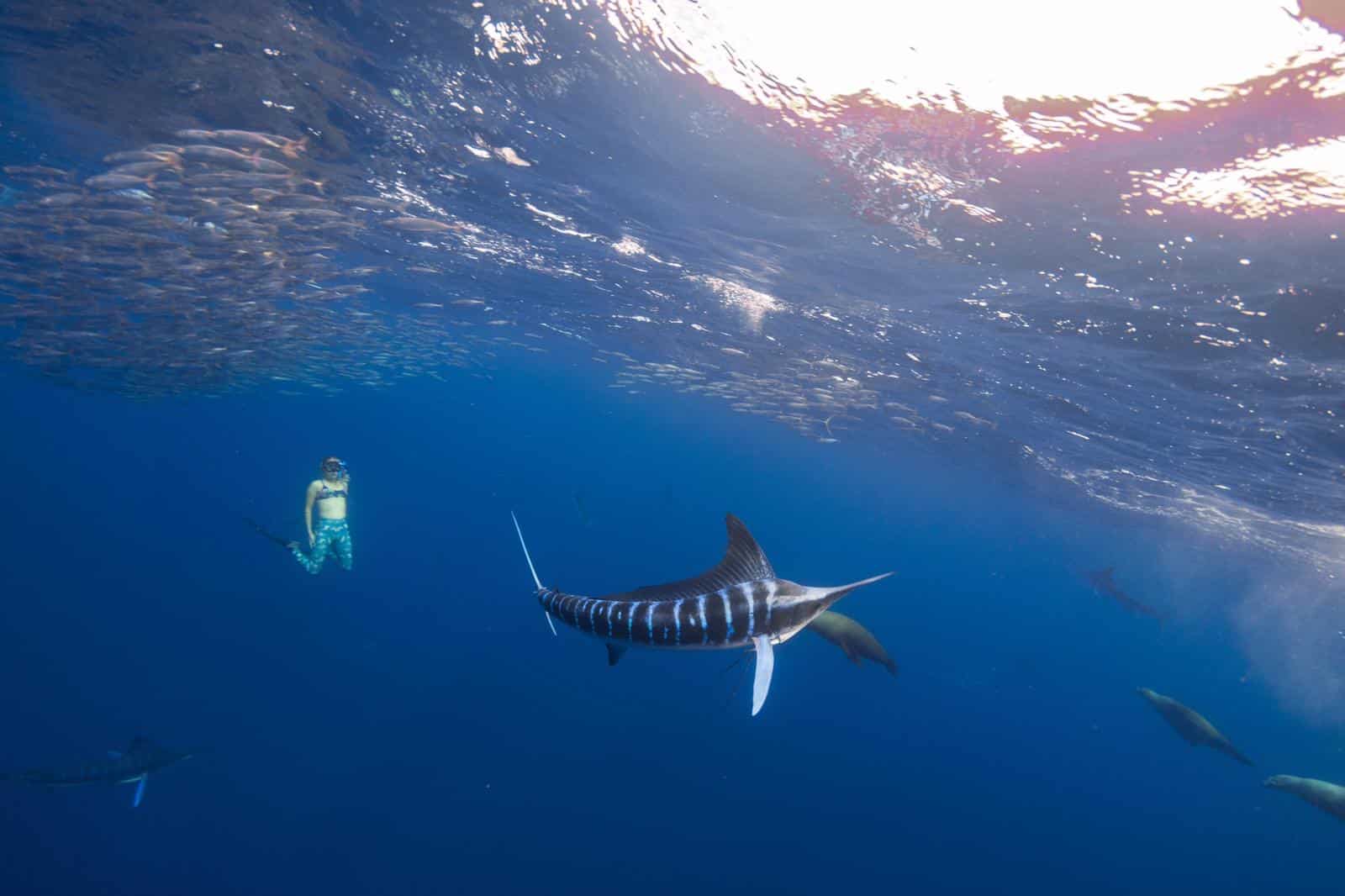 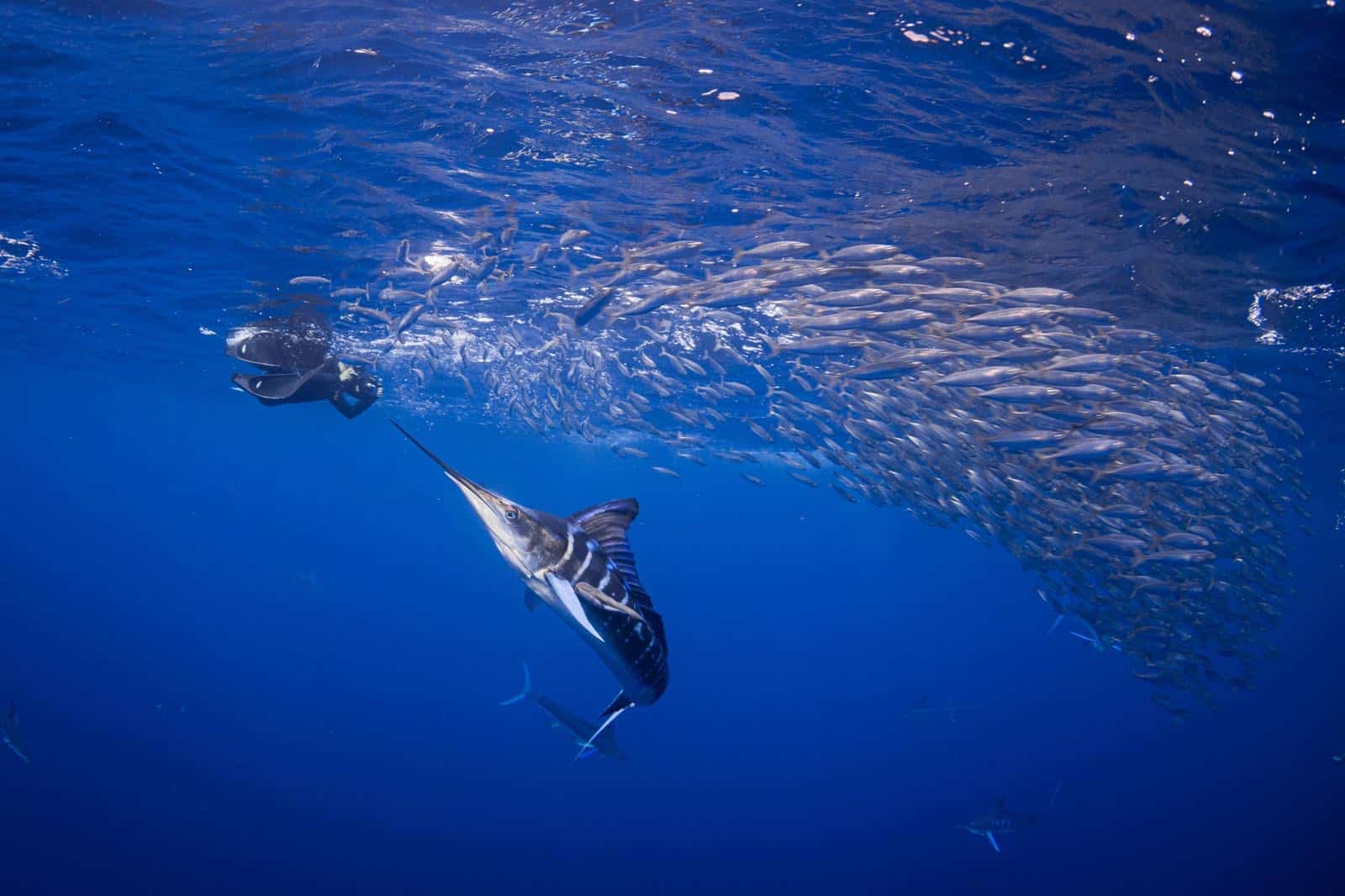 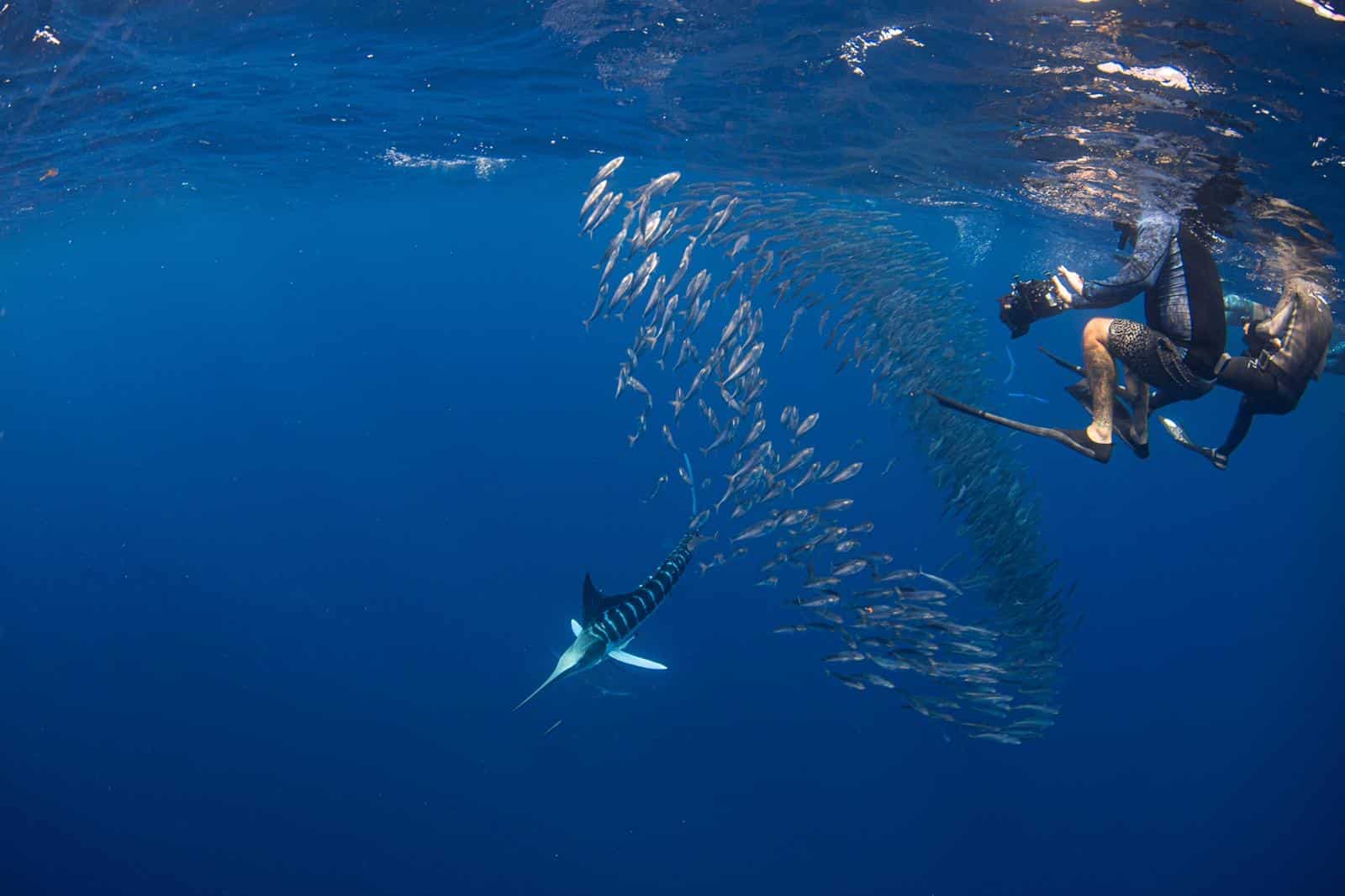 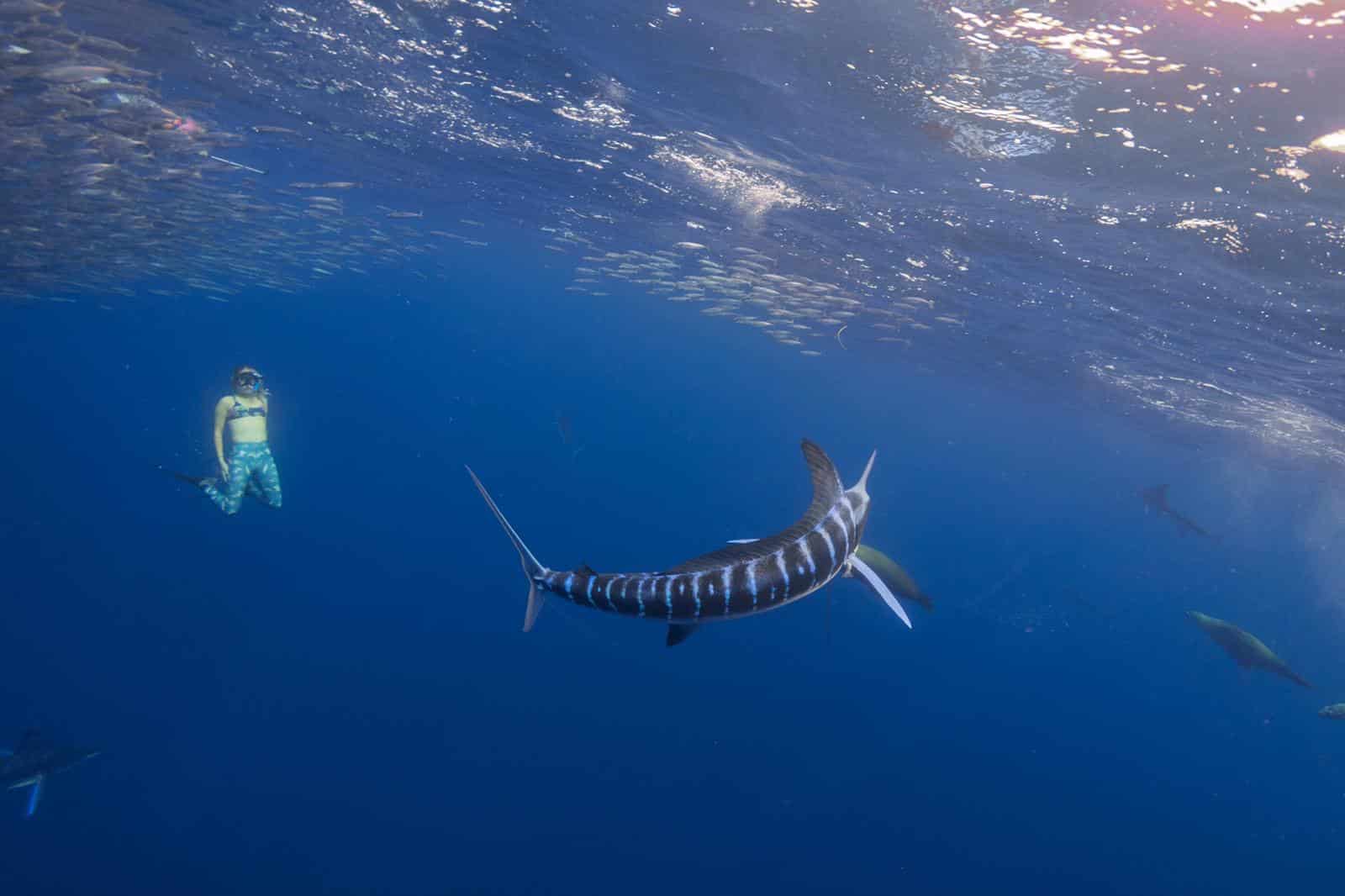 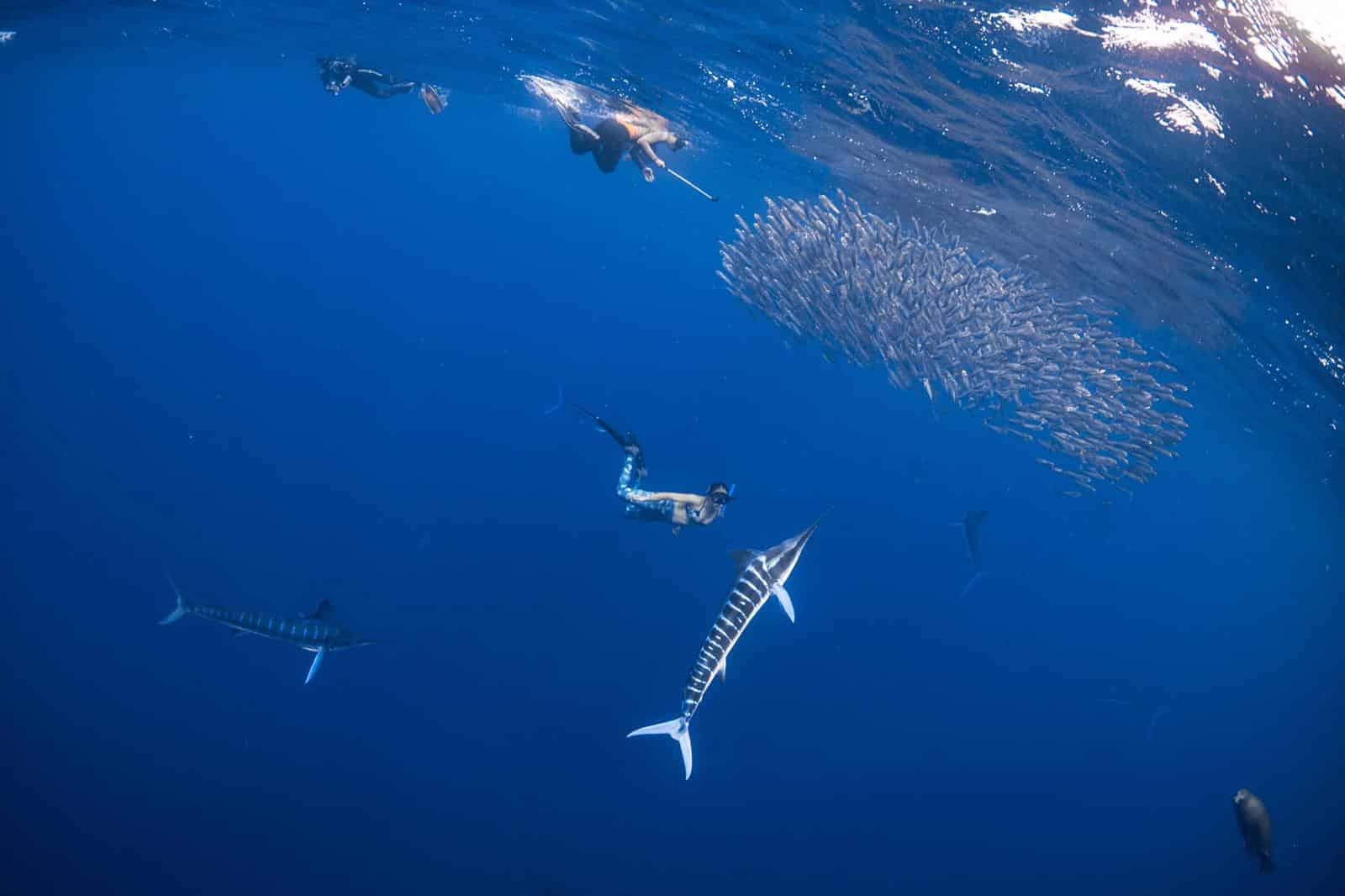 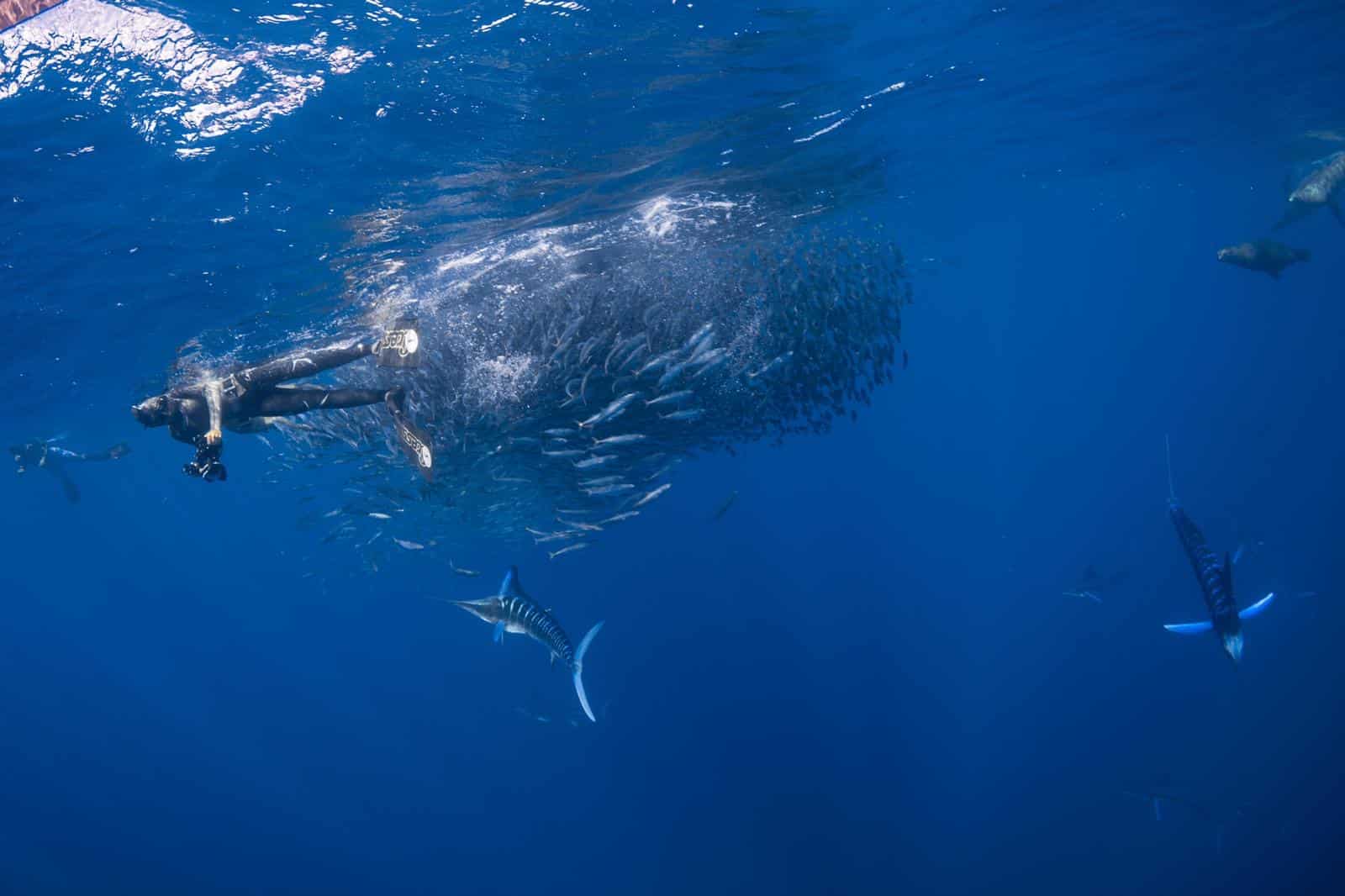 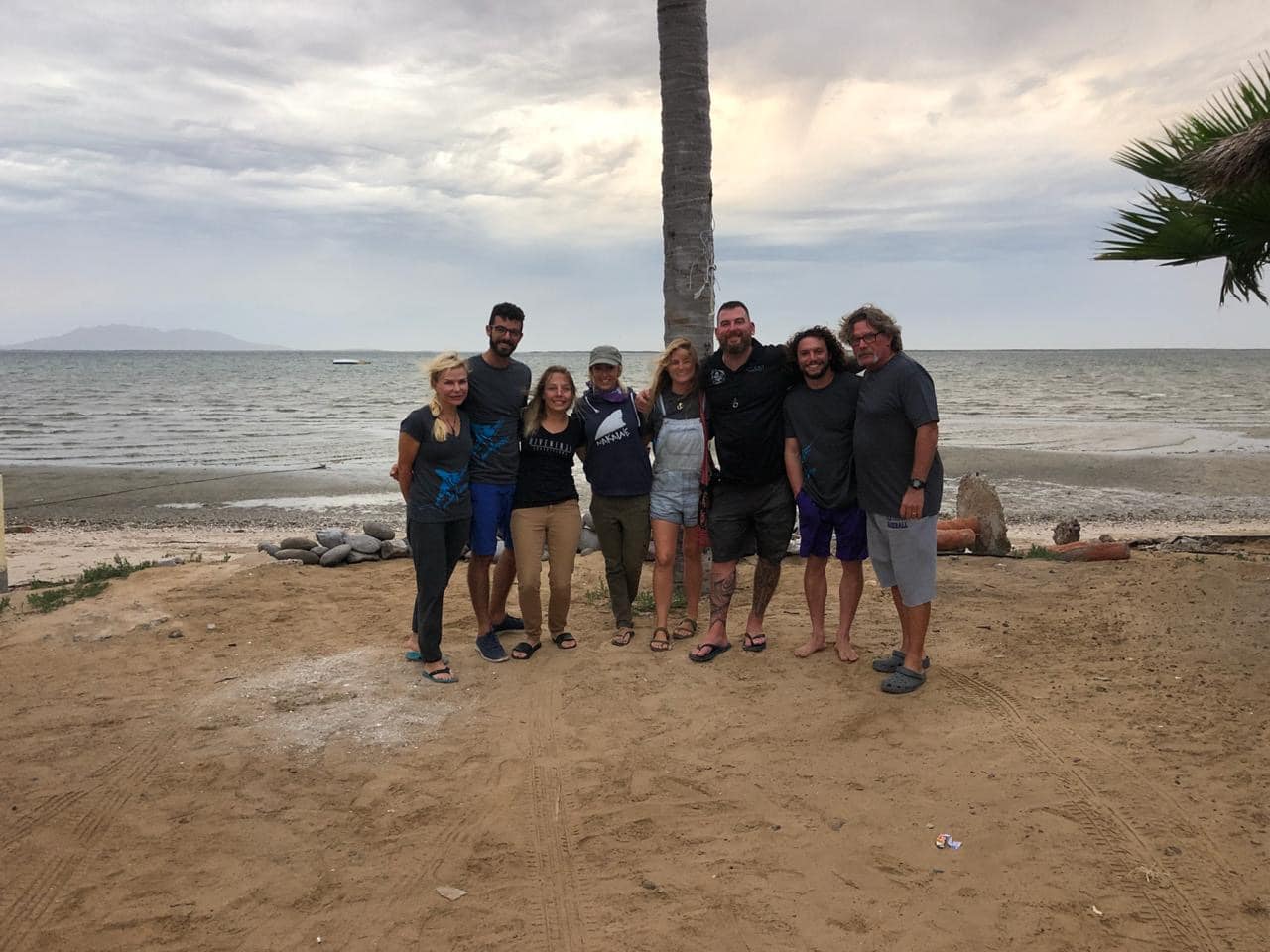 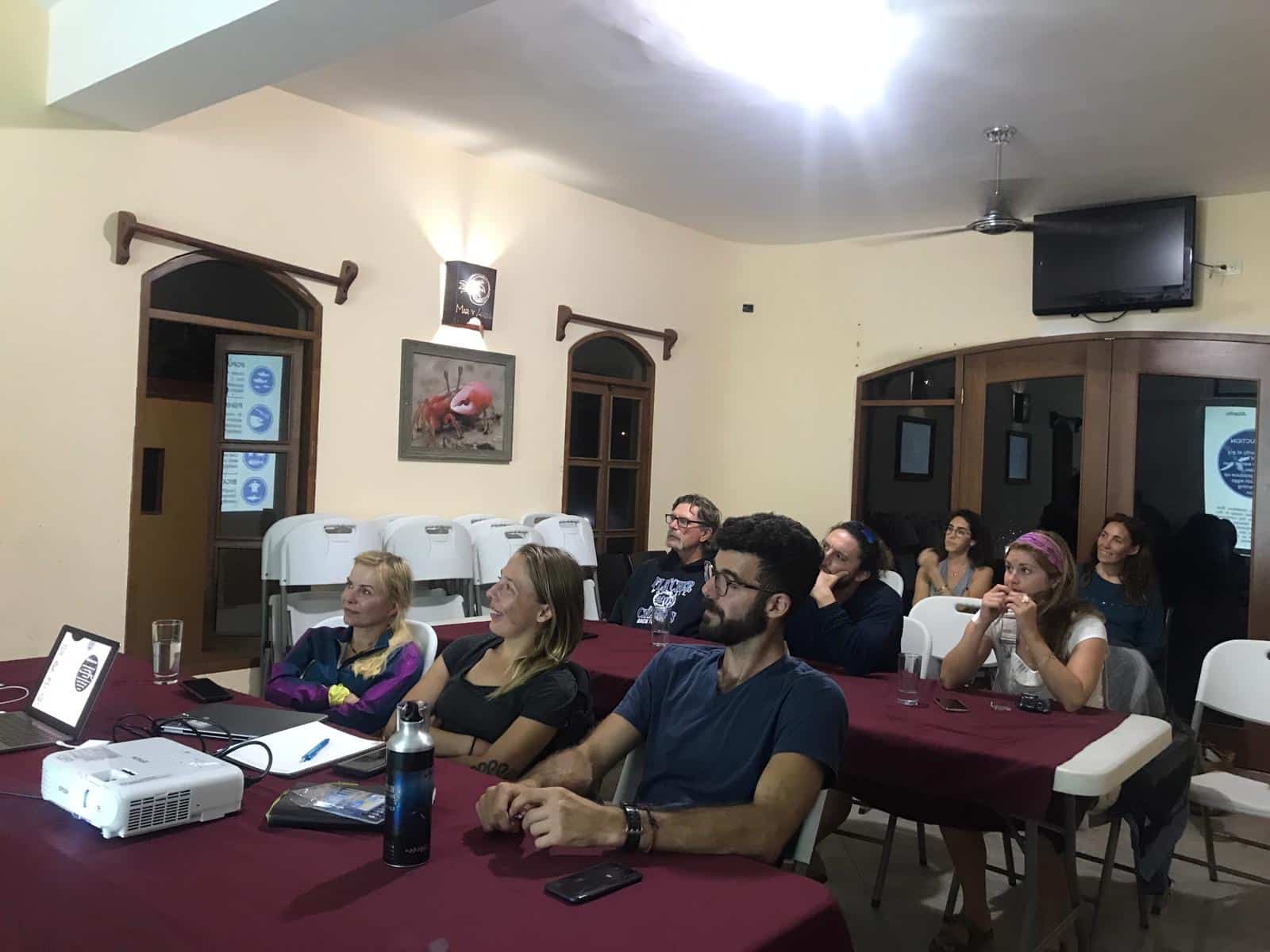 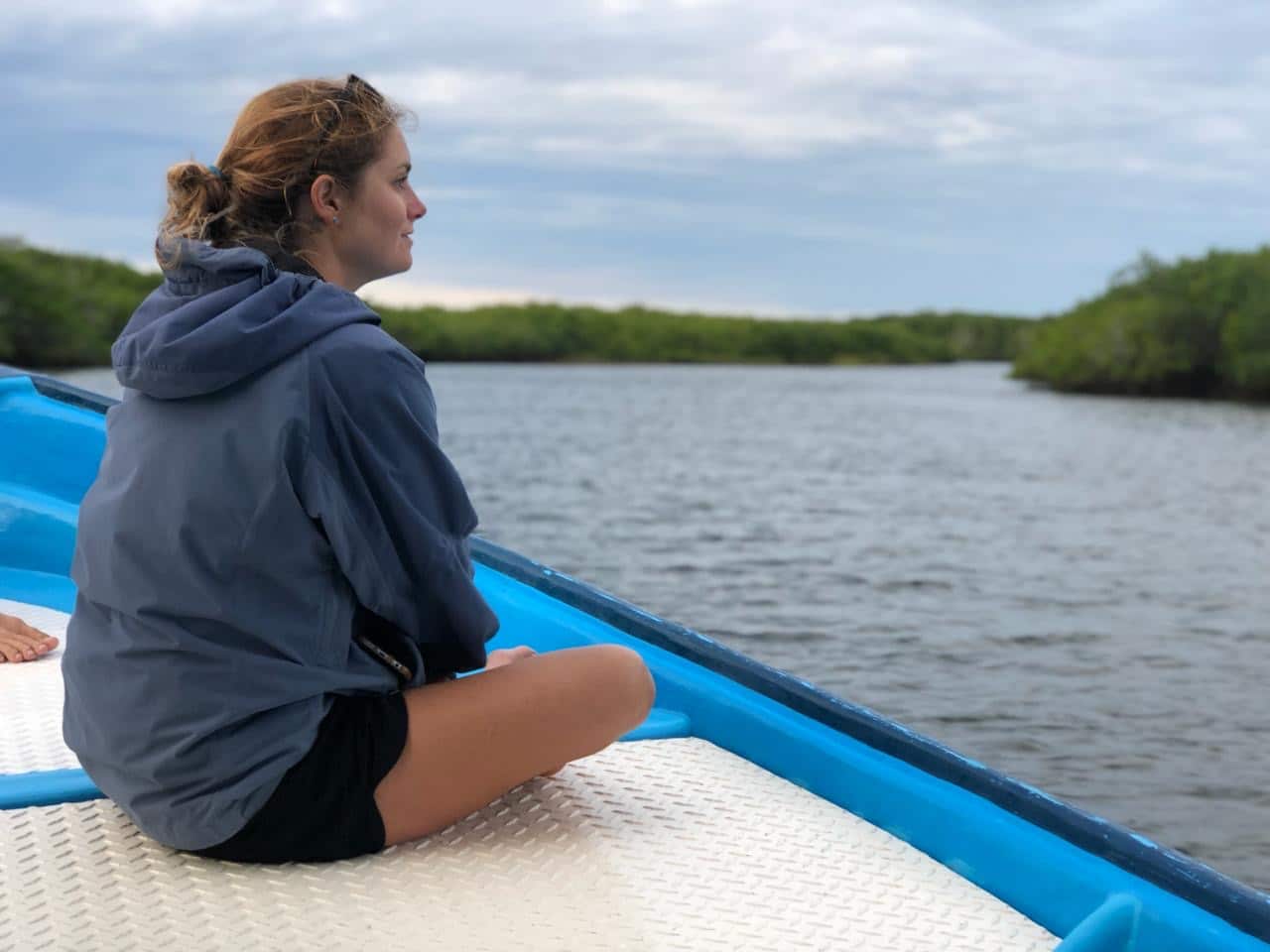 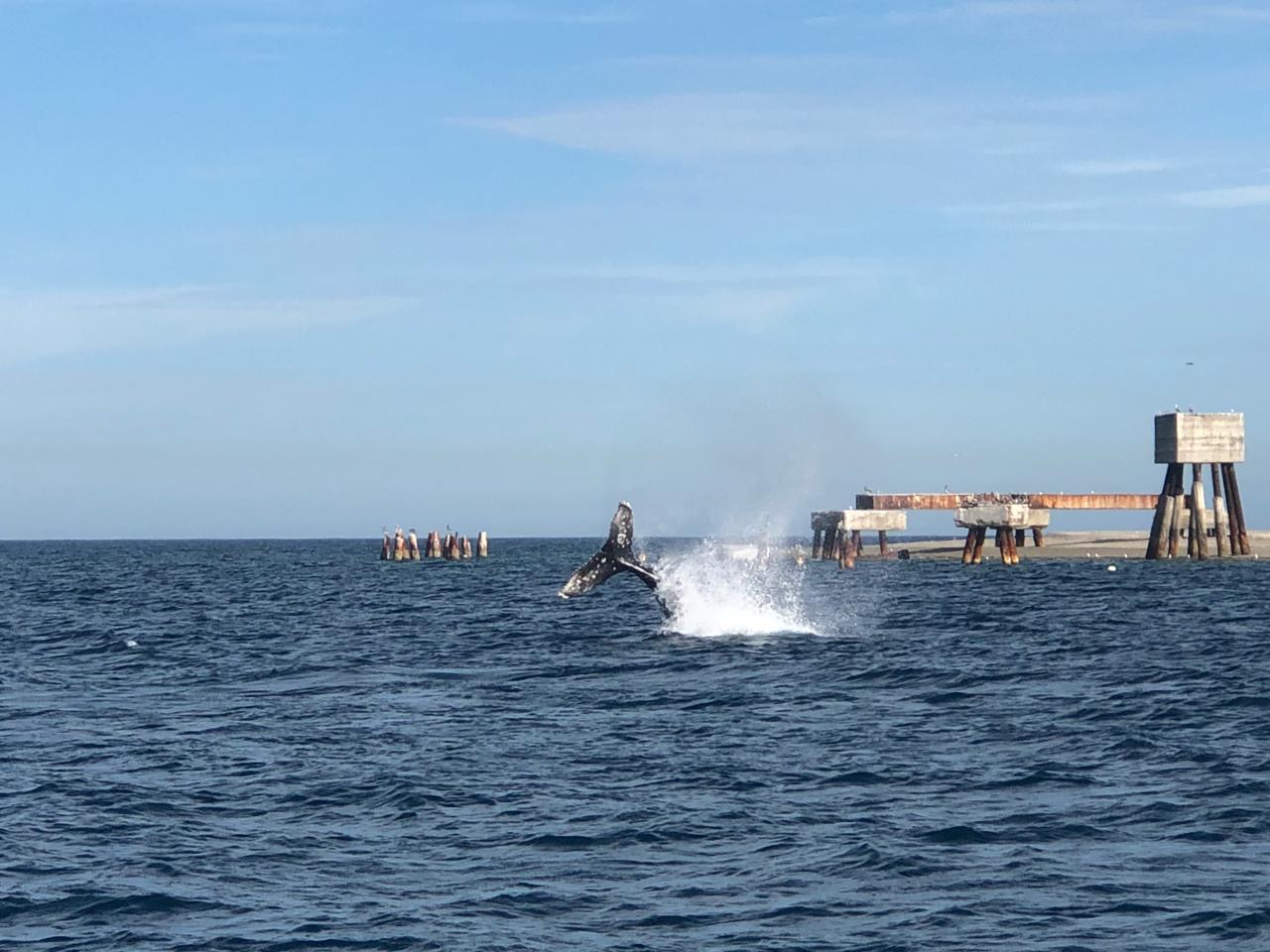 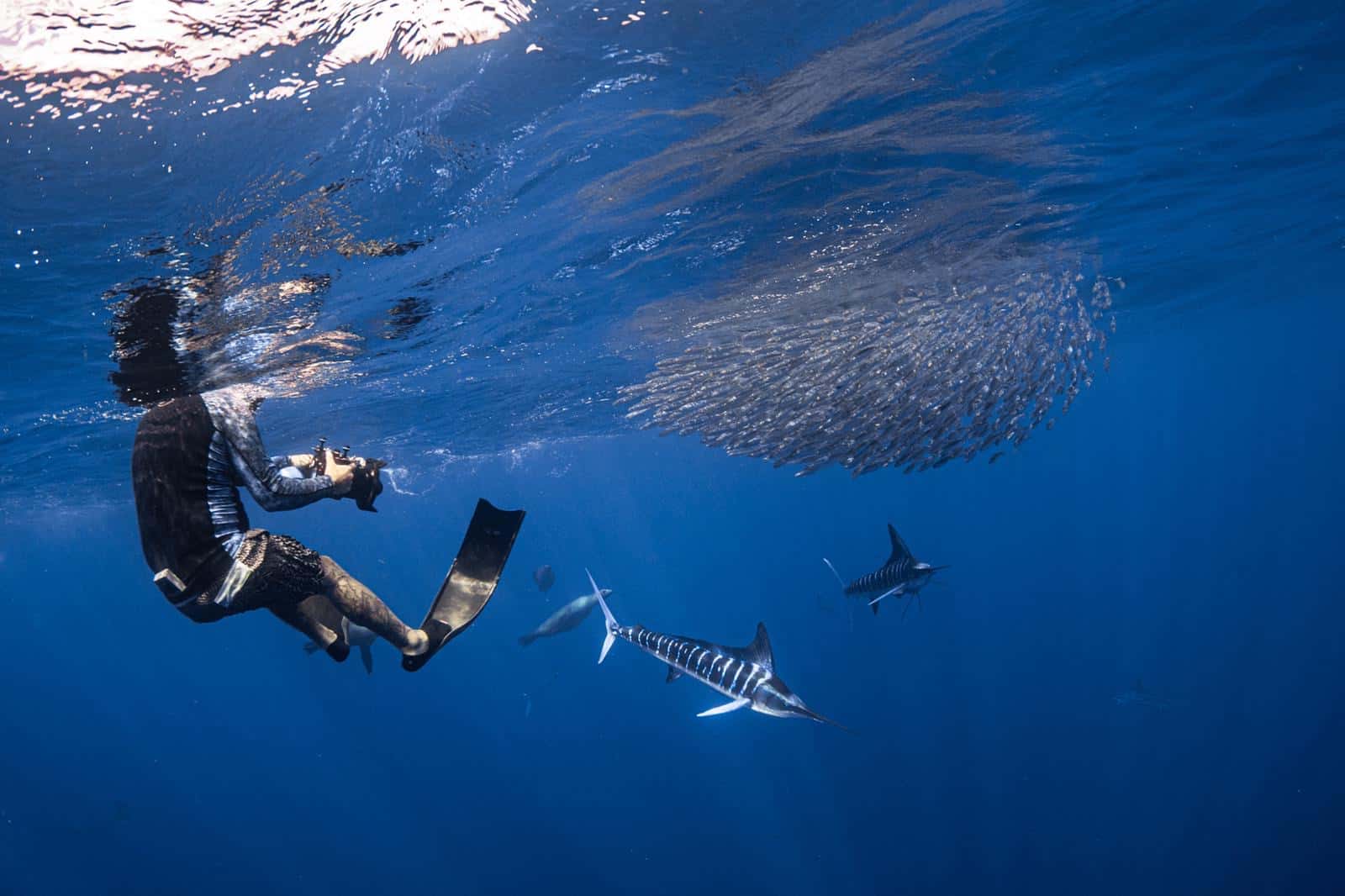 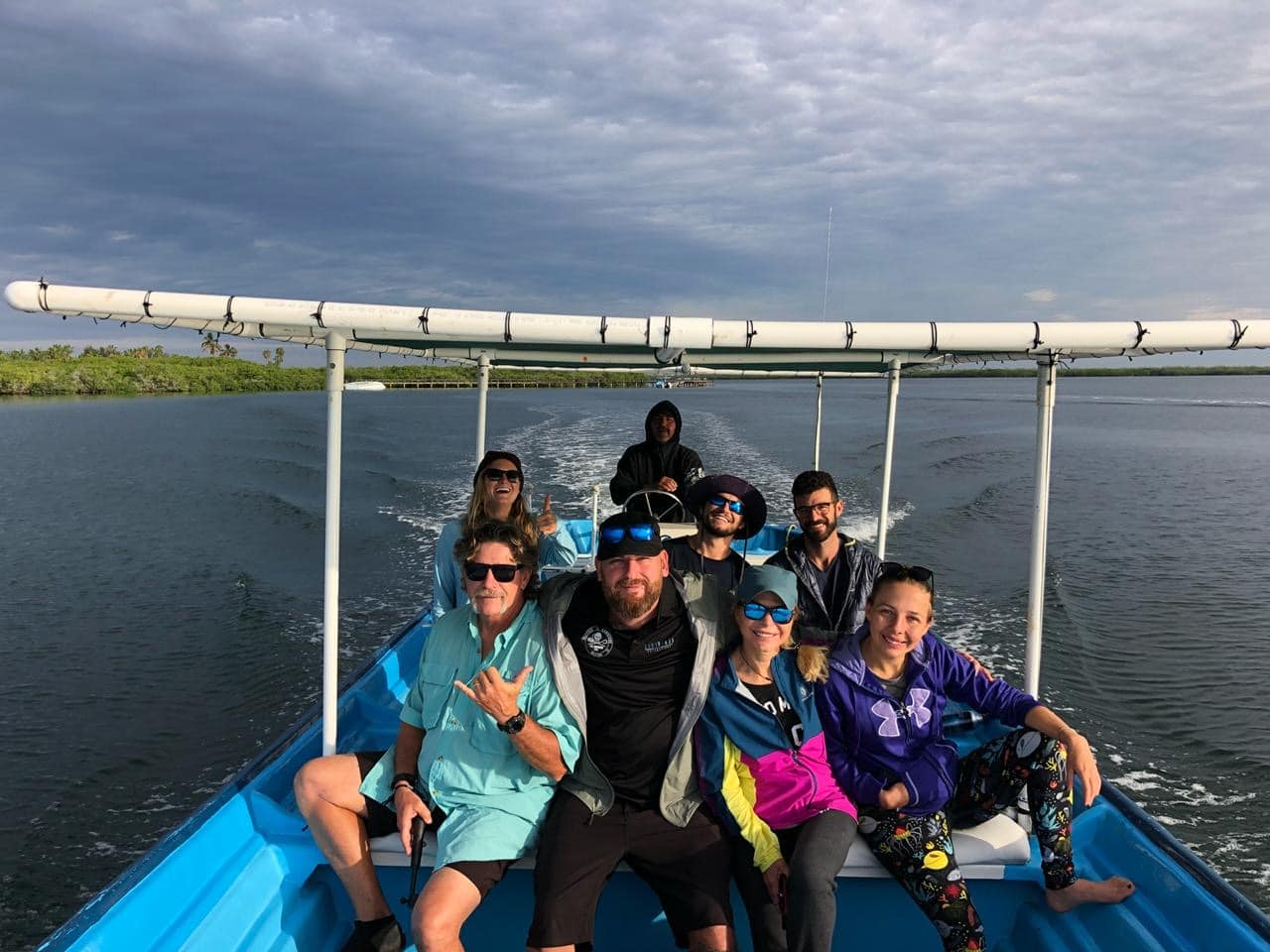 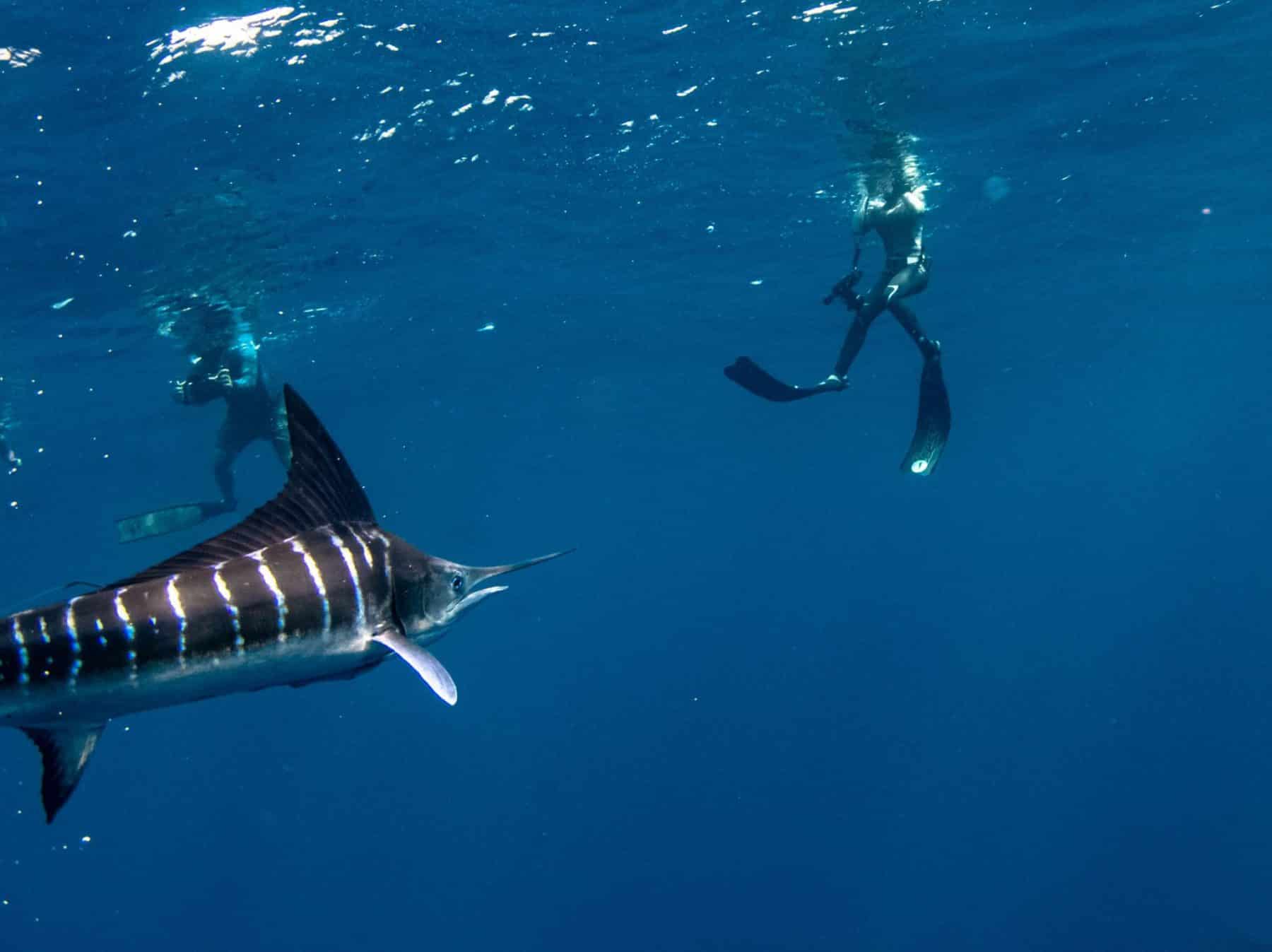 About the Author: Ellen