Massive schools of Mobula Munkiana, more commonly known as Munk’s Devil Rays or locally as Mobula Rays, fill the waters of the Sea of Cortez & Pacific Ocean around the southern Baja California peninsula in Mexico every year creating one of the greatest diving experiences on earth. However not much is known about the lives of these acrobatic rays. Today we take a look at some of the little bits we do know about these beautiful creatures.

Like clockwork, when the water temperatures begin to change, these elusive creatures begin to congregate in the tens of thousands around the shores of Baja California Sur, Mexico providing divers & snorkelers with some of the most spectacular marine acrobatic shows and underwater experiences nature has to offer. The Mobula rays visit southern Baja in two distinct seasons, the late spring/summer (late April-July) and the late autumn/winter (November-January). They can be seen in numerous areas around the peninsula at different times during these periods – including Cabo San Lucas, Los Cabos, La Paz, Loreto, La Ventana, Cabo Pulmo, and more. 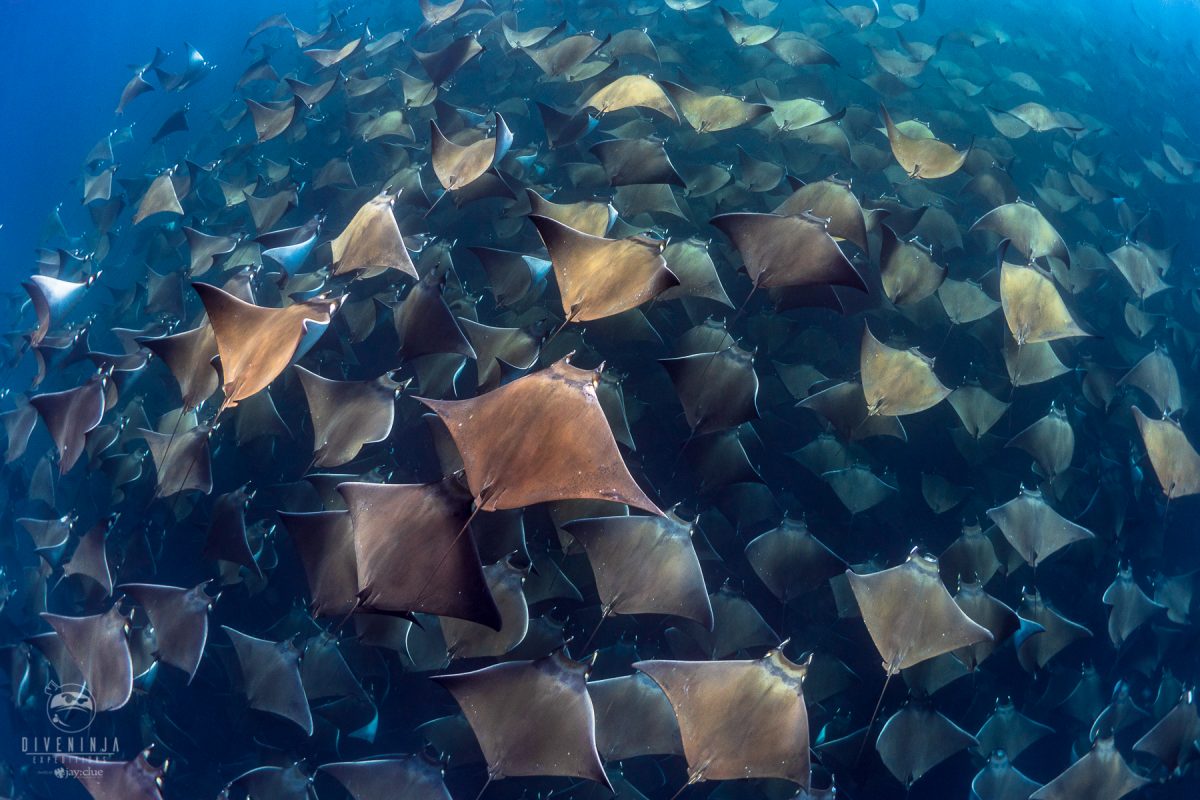 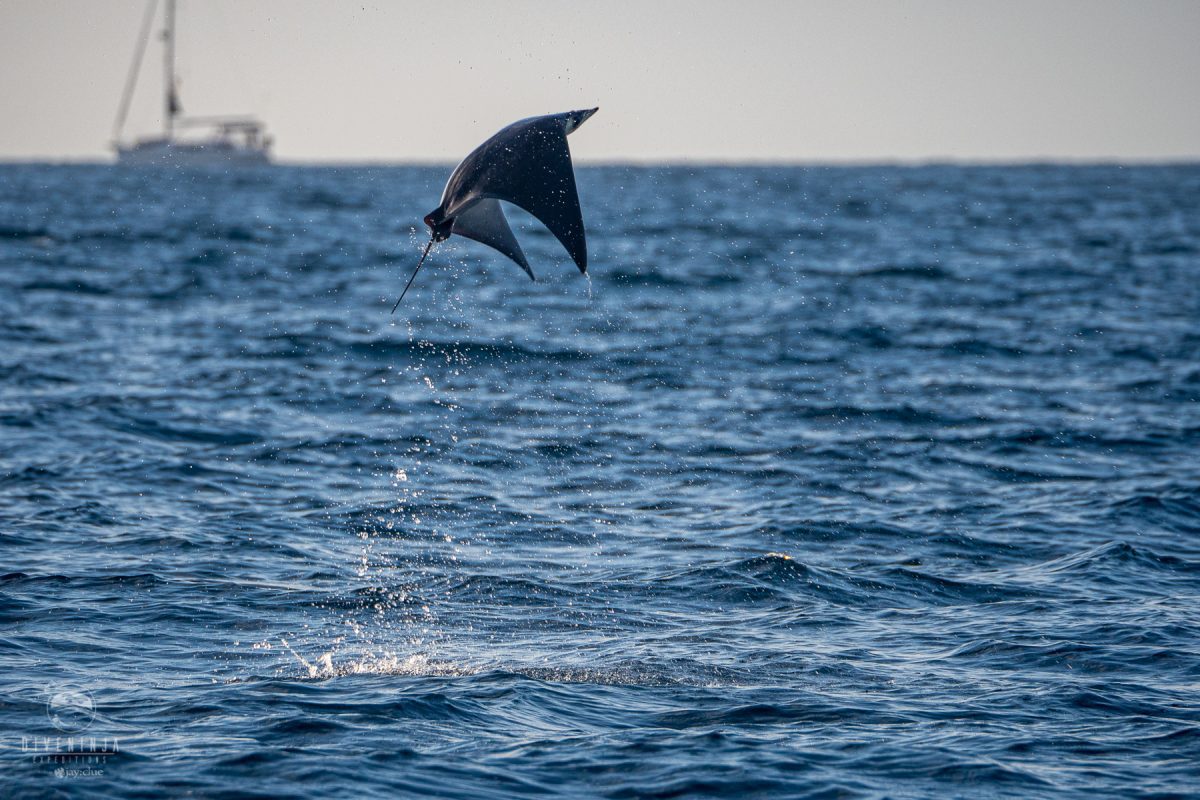 Their scientific name is Mobula Munkiana – which is where their common name Munk’s Devil Ray comes from. Growing to only 1 meter (3 feet) wide makes them the smallest of the Mobula genus, which includes other species of devil rays as well as their much larger cousins – the Manta Rays. Mobula Munkiana are regarded as the most acrobatic of all rays and can be often seen performing flips and somersaults while jumping up to 3 meters/9 feet above the surface of the ocean. But not just 1 or 2 of them, when they form large congregations one can see hundreds of them jumping in succession for hours on end. The noise they make as they launch from the water and splash back down sounds like popping popcorn echoing across the ocean surface.

During the springtime, when the currents change and bring large sums of plankton and nutrients to the surface from the depths, the largest gathering of rays occurs. During this time the schools can number in the tens of thousands of mobula rays and be over a kilometer long. It is believed that these devil rays come to Baja to find mates and reproduce, and that the abundance of plankton, which is the Mobula’s favorite dish, brings them to this part of the ocean. Watching their behavior and comparing it to other species of the genus confirms the speculations of the reason they congregate in such huge numbers – to find mates and give birth. Recently the identification and description of the first ever discovered nursery area for a Mobula species, was found right here in Baja, near La Paz, Mexico by scientist & mobula expert, Marta Palacios of Pelagios Kakunja. It is believed that more of these nursery areas exist around the Baja California Sur peninsula. Dive Ninja Expeditions has teamed up with Marta to run mobula ray citizen science expeditions to assist in the search for more nurseries in the area, as well as helping to build more data on new areas through ongoing scouting trips and imaging in hopes of pushing for further protection of the species. 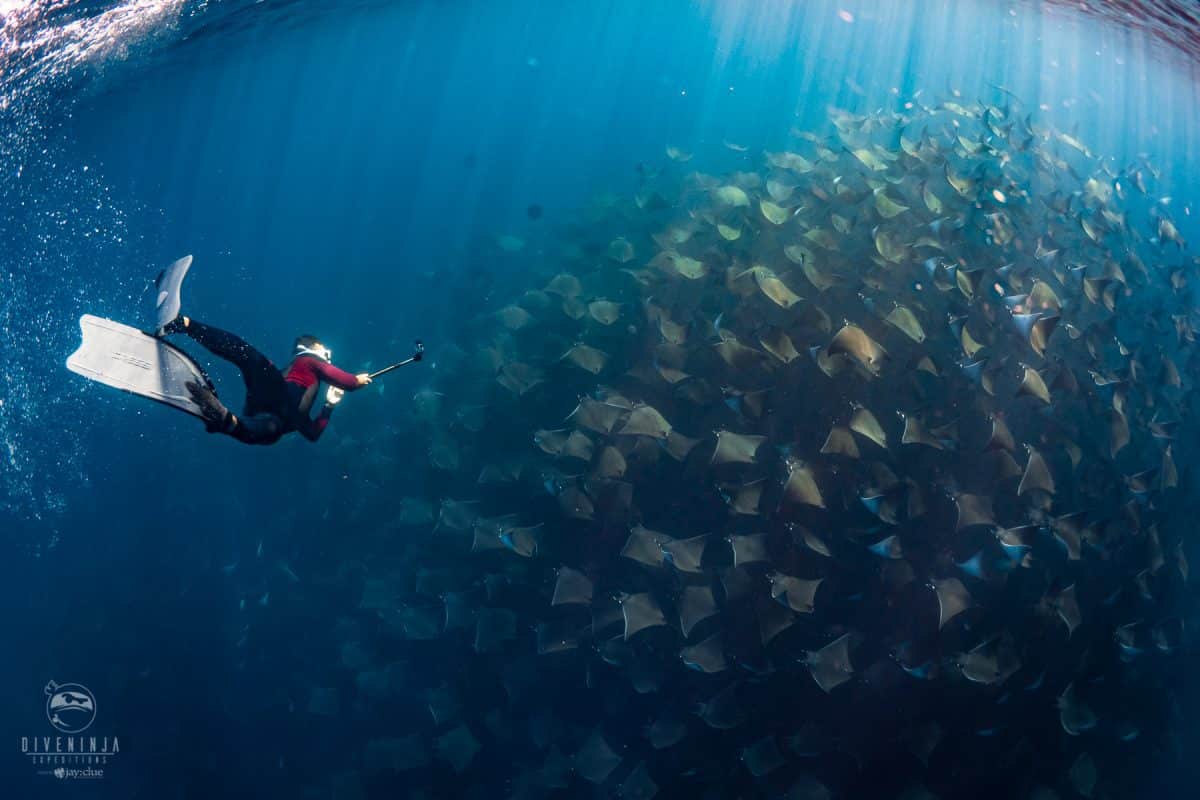 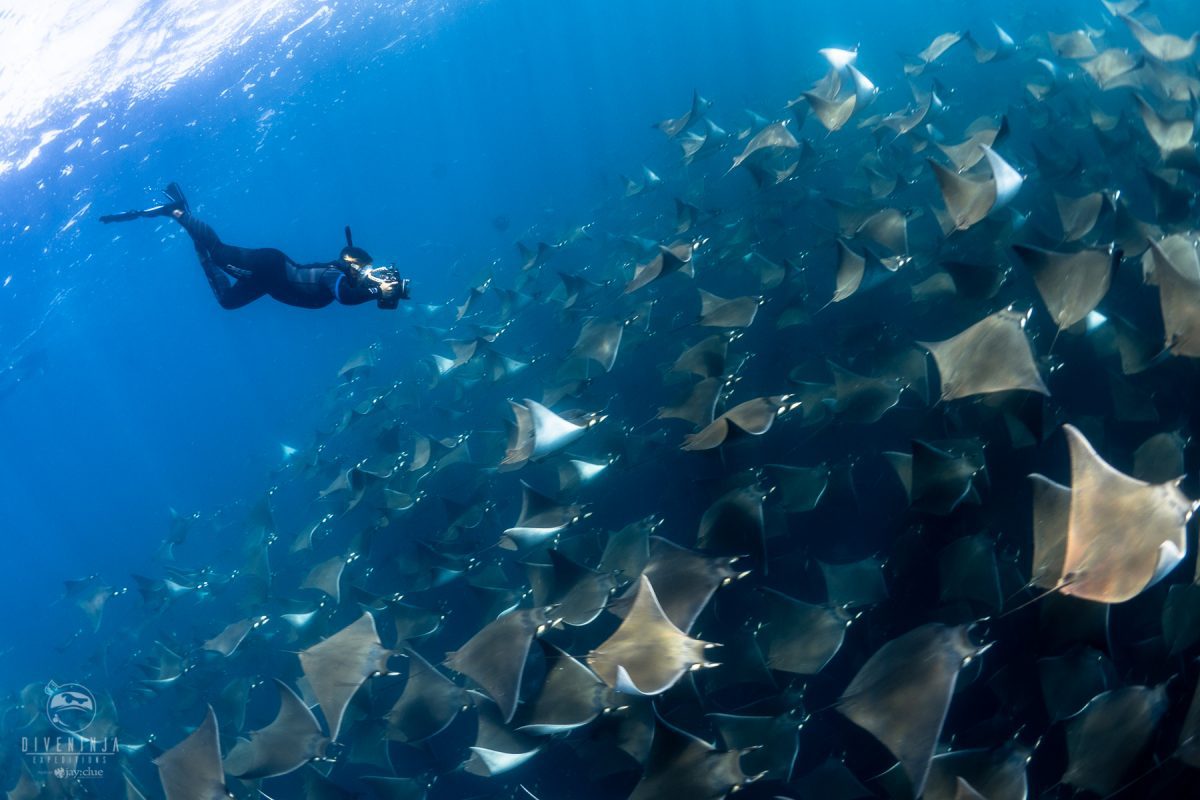 Mobula rays have cephalic fins, which are two frontal lobes that extend from the sides of their mouth and help funnel water and food into their mouth, just like their larger Manta ray cousins. But, unlike their cousins, the lobes of these Mobula rays do not unroll into flat fins. When viewed from above these modified fins look a bit like horns, which is where the nickname “Devil Ray” comes from. However you might be surprised to learn that an animal with the name ‘devil ray’ has a very peaceful nature and is completely harmless. They are usually quite shy and can be very afraid of bubbles, which might be because of their main predator – the mighty Orca.  Orcas will sometimes create bubble “nets” to gather the rays together to make them easier to hunt. Therefore, you won’t usually have great interactions with the Mobulas while scuba diving. Freediving and snorkeling with them on the other hand increases your chances of getting up close to them. But don’t worry, you dont need to be a champion freediver to see them, they are usually spotted near the surface and schools are rarely more than 5 meters (15 feet) below the surface.

It is estimated that these Munks Devil Rays give birth to only one pup every 3-5 years and that they move through the eastern Pacific according to water temperatures, transiting the waters from Mexico to Peru including the offshore islands of Galapagos, Malpelo, Cocos, and the Revillagigedo Archipelago. But many facts about this species are still unknown, and a lot of information is lacking. For example, it is unsure how long these elegant creatures live for, and at what age they become mature adults; what their gestation period is and their reproductive habits; why do they jump or what are their migration patterns are… beckoning the next generation of scientists to begin filling in the gaps and helping us understand them better.

What we do know, is that the Mobula Ray’s conservation status has been labeled as Near Threatened on the IUCN red list since 2006. Their large surface schooling behaviors and that they tend to stay near the coast makes them regular by-catch victims of commercial fishing, as well as getting caught in gillnets, and by trawlers. This decimation of their population coupled with having one ofthe lowest fecality rates (chance of reproducing) of all marine life creates a very dangerous situation for the species. A situation that calls for more research to be done on these incredible animals and more regulations put in place to protect them. 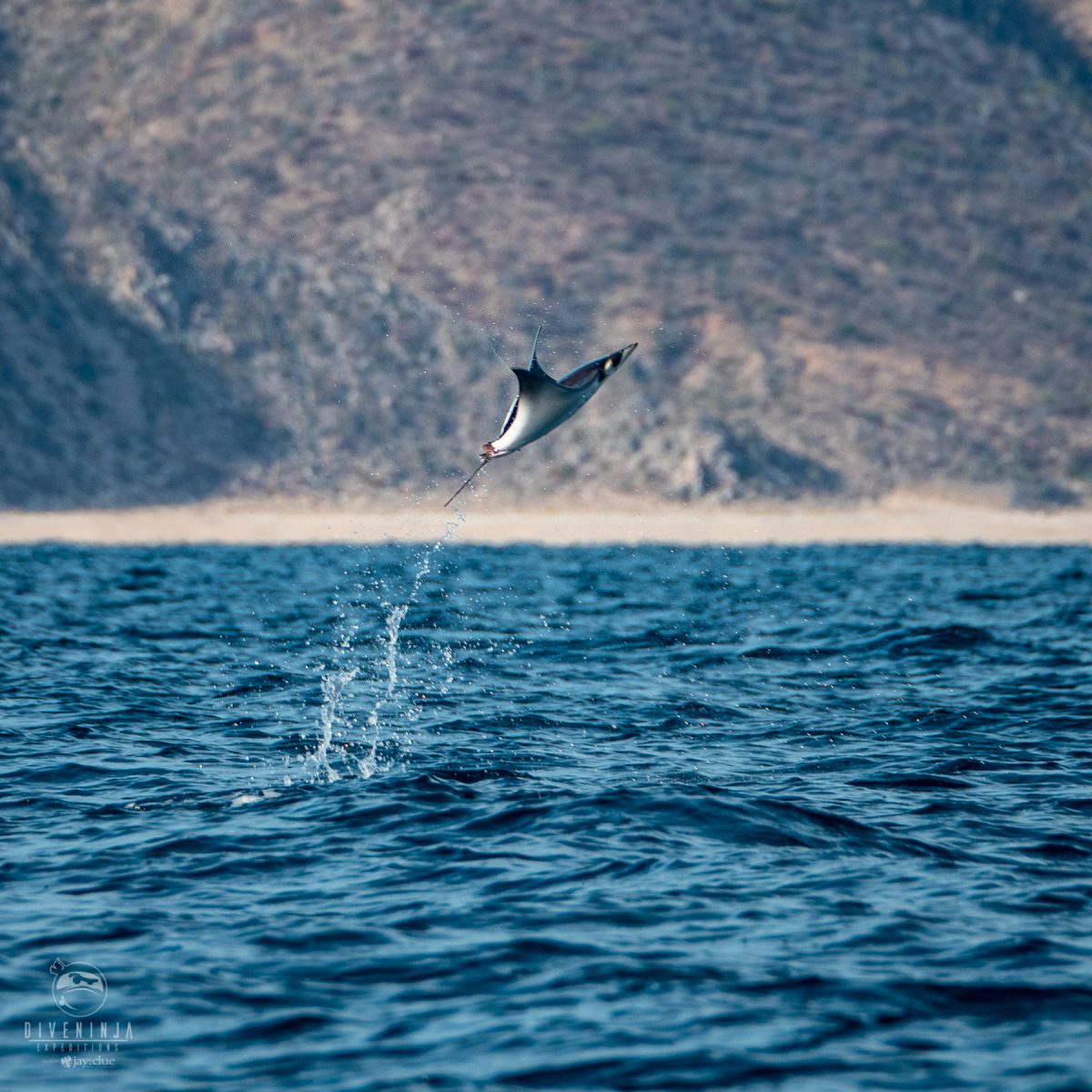 This is why here at Dive Ninja Expeditions we feel it is of the utmost priority to help further the research of these incredible animals through citizen science expeditions and proper eco tourism. We invite you to join us and enjoy this remarkable spectacle of nature during the Mobula ray migration in Baja California Sur, Mexico. By joining one of our Mobula Ray citizen science expeditions you not only get to share the water with the remarkable creatures but you also get to help contribute towards a growing body of research to better understand them and help protect them. And on top of that Dive Ninjas donates a portion of every ticket sold to help fund Marta’s research into them. We hope that as more people see how special and beautiful these animals are, they will understand the importance of learning more about them, and helping us to protect Mexico’s magnificent mobula rays.

For more information on our annual mobula ray expeditions please click here. Or give us a shout with any questions by clicking here. 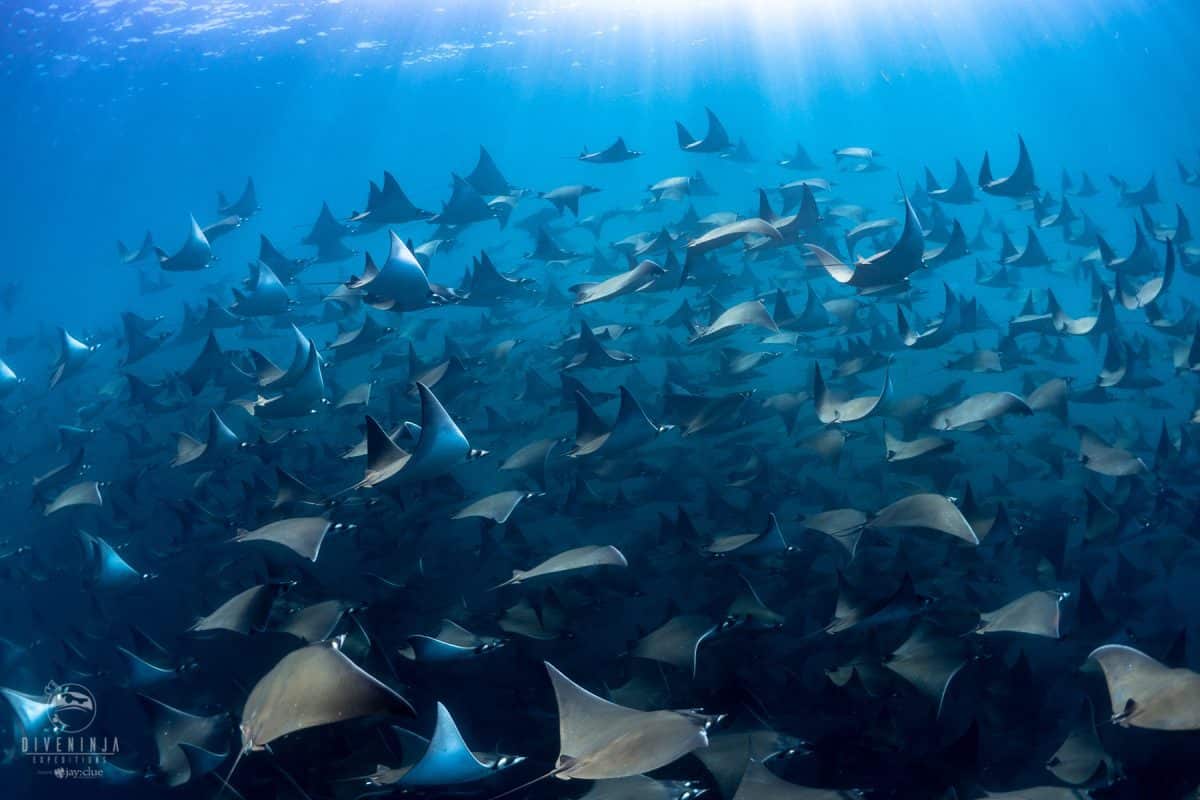 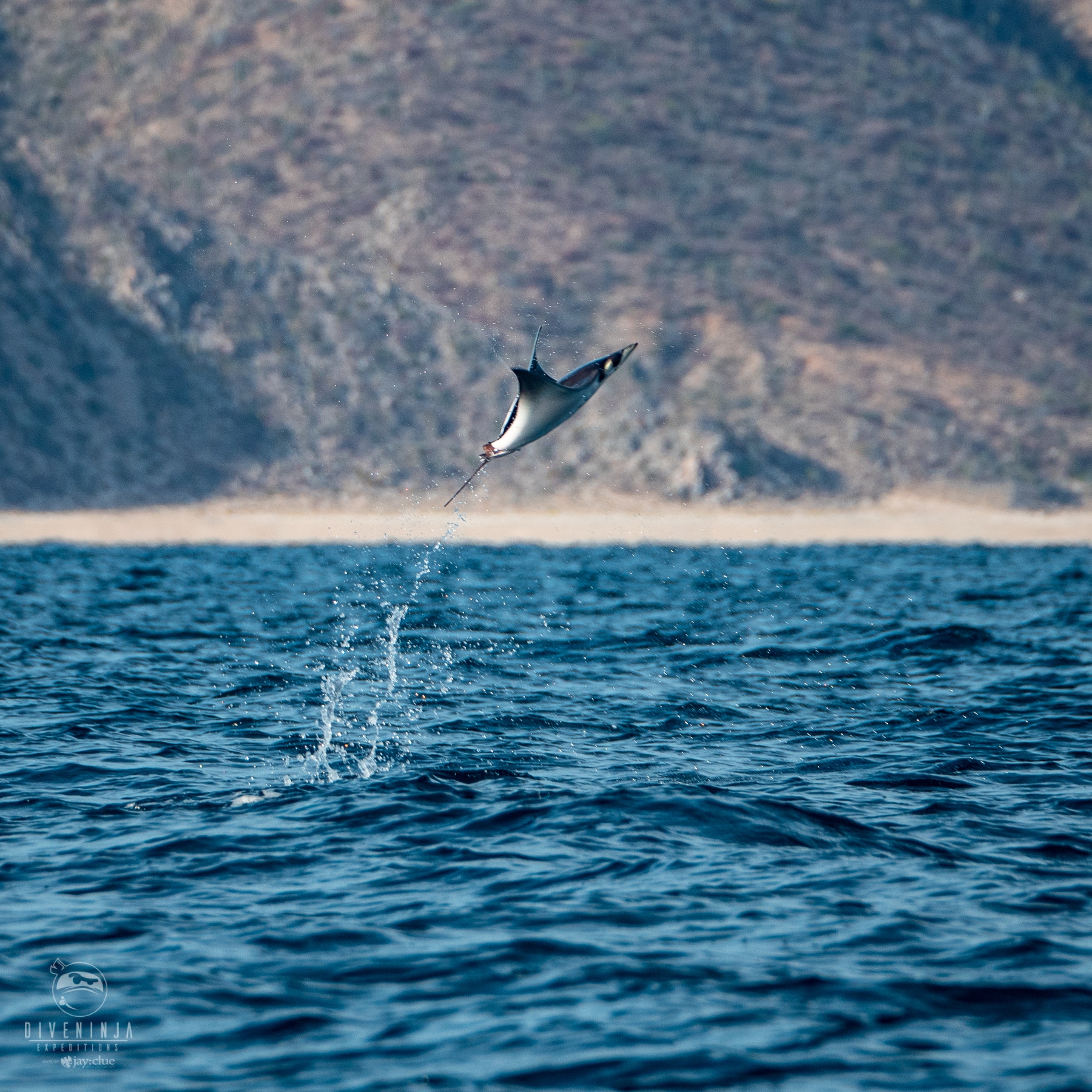 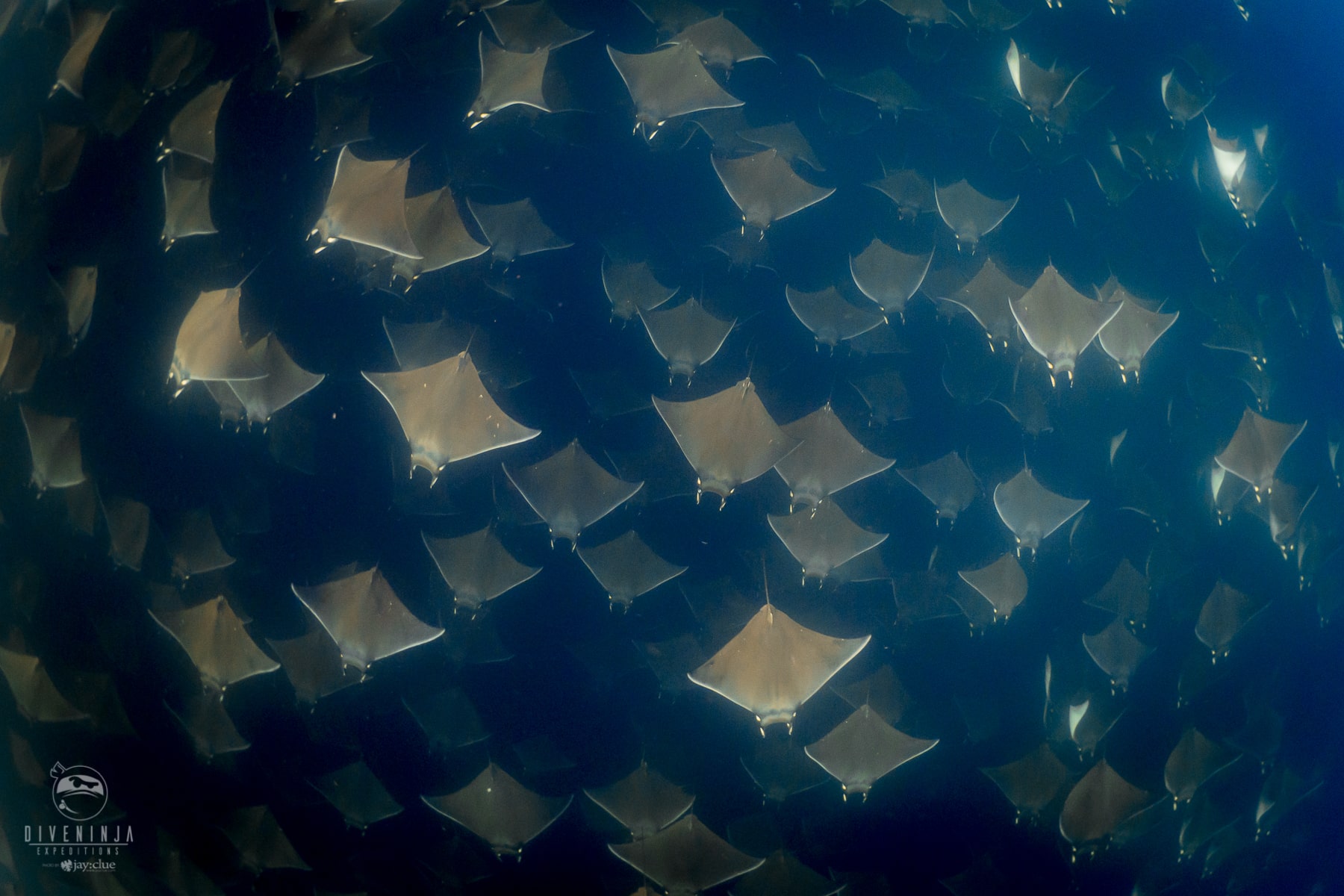 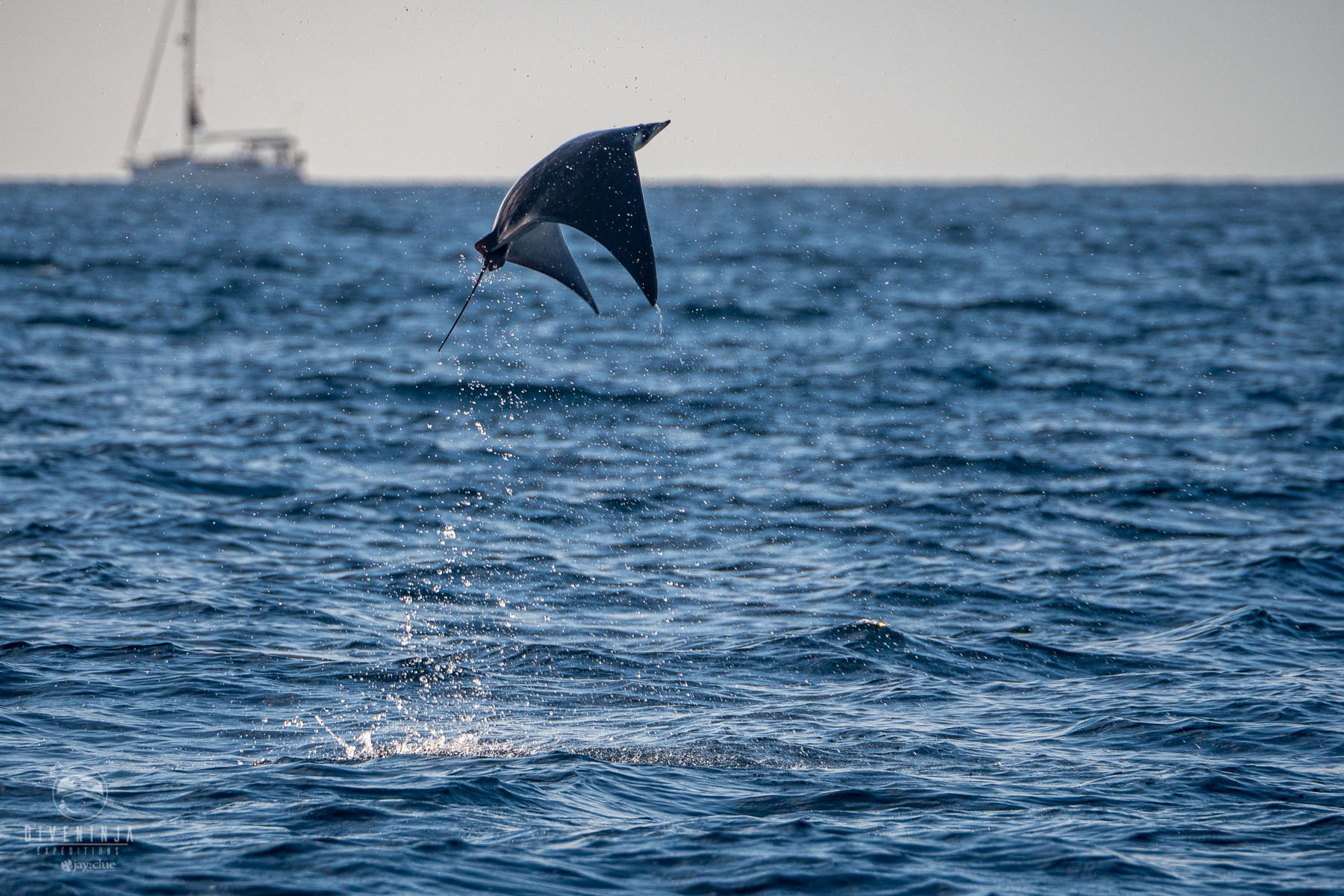 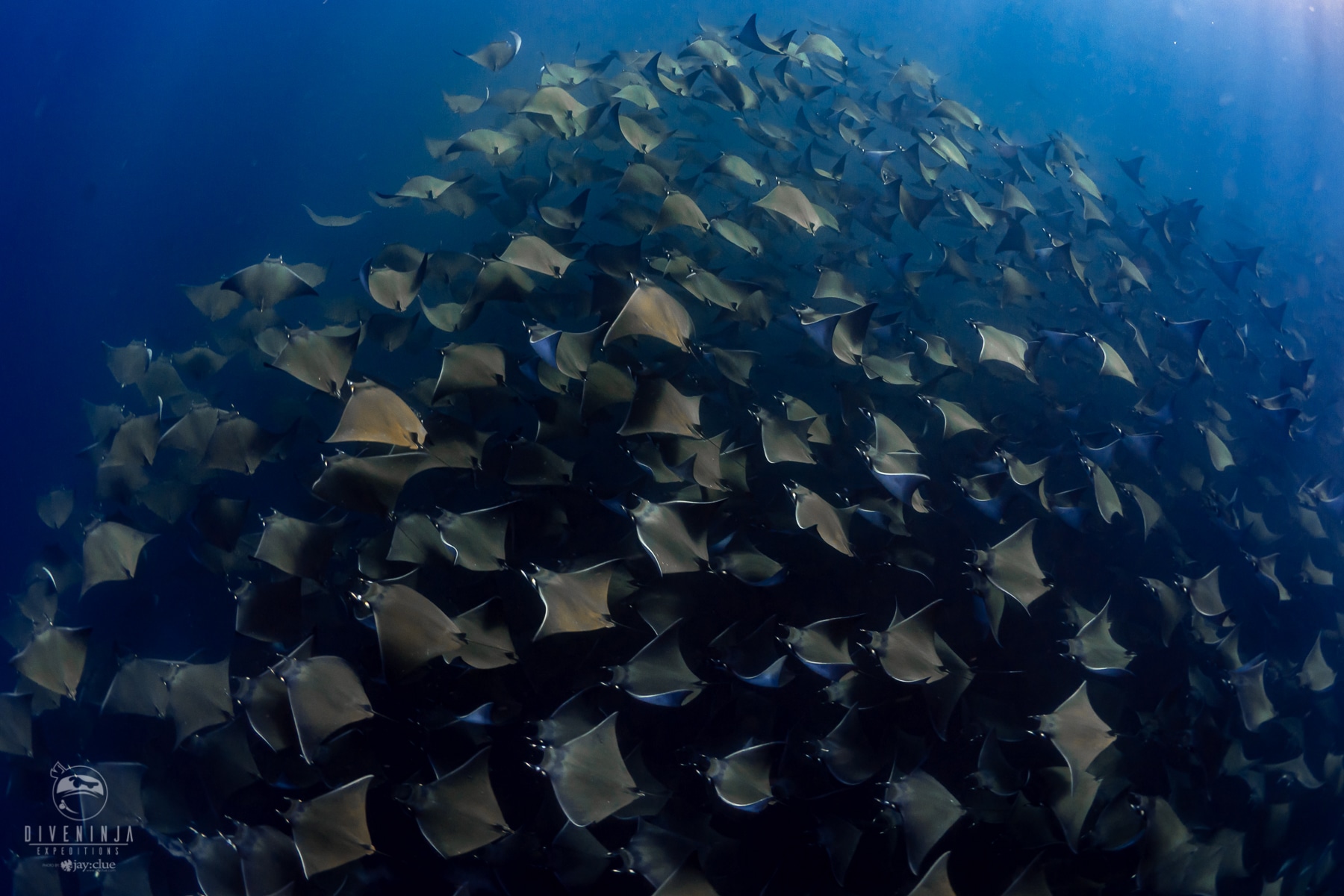 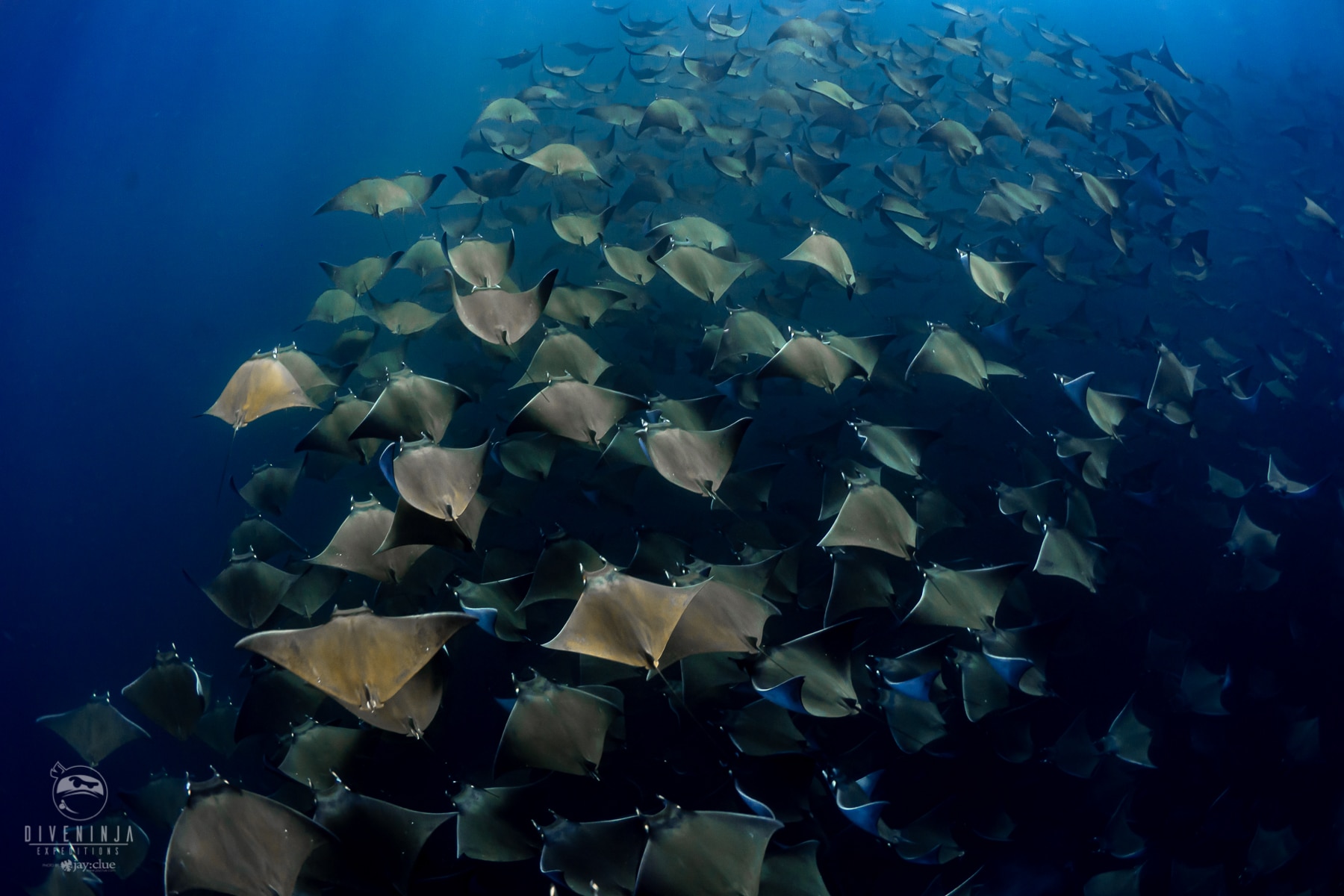 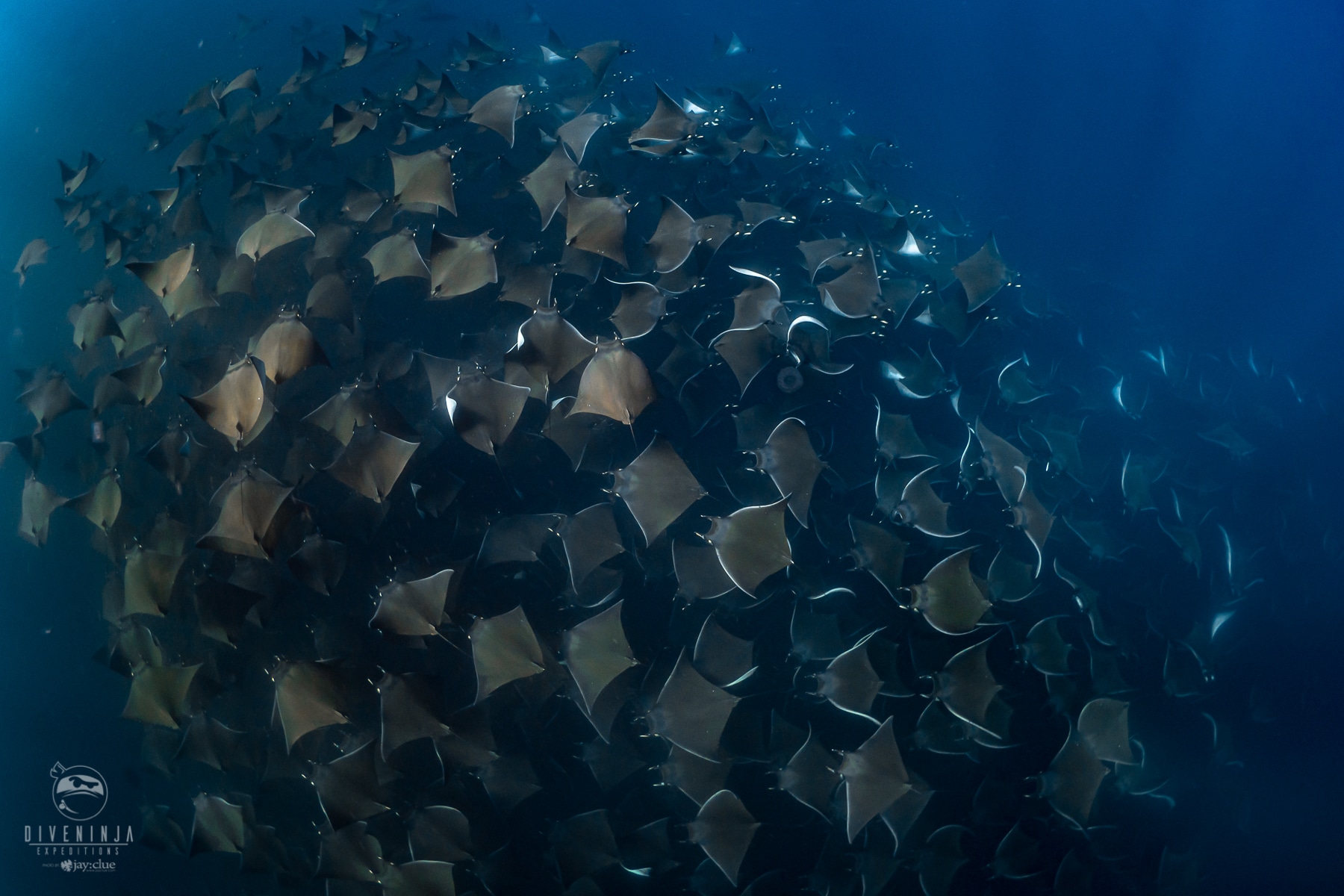 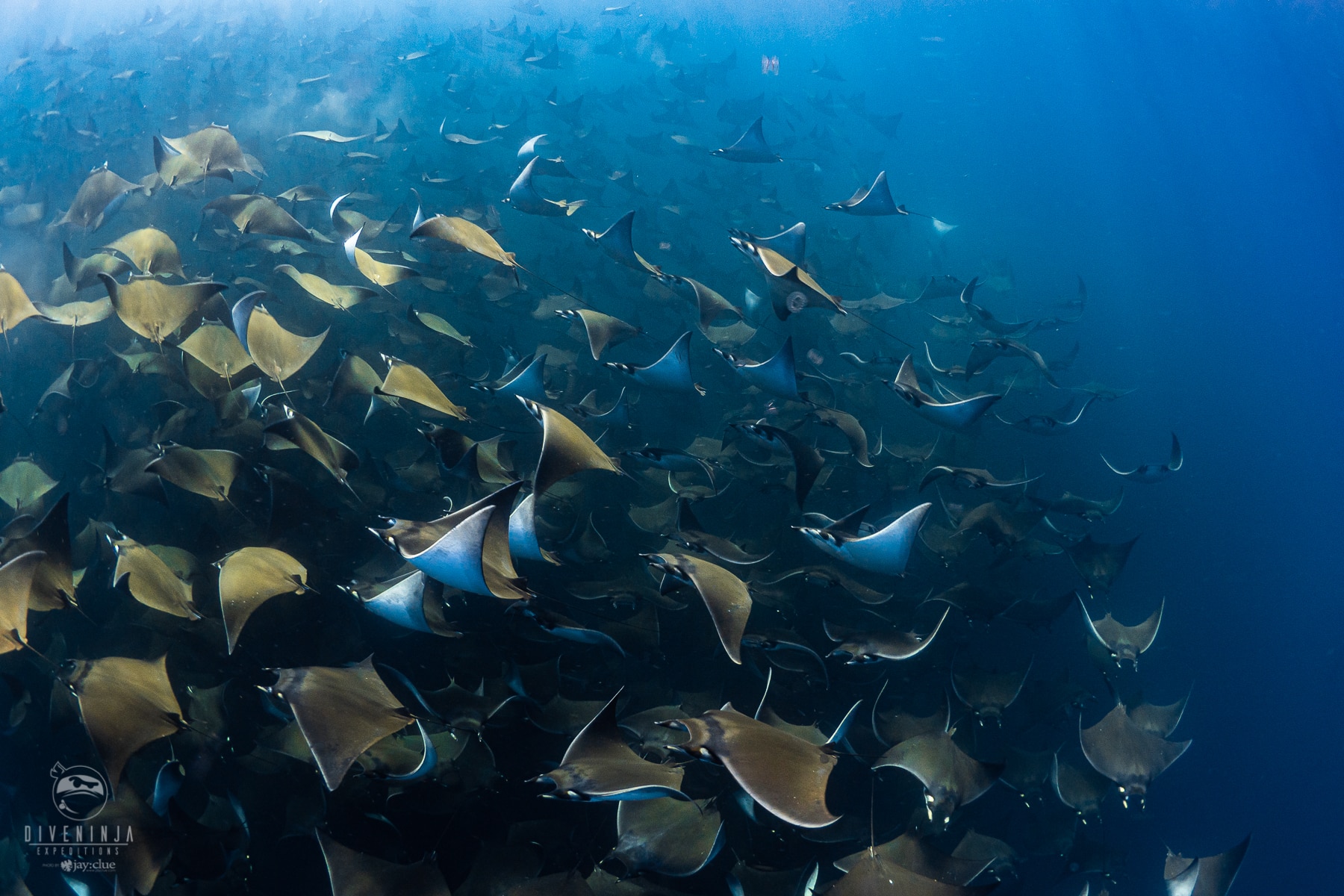 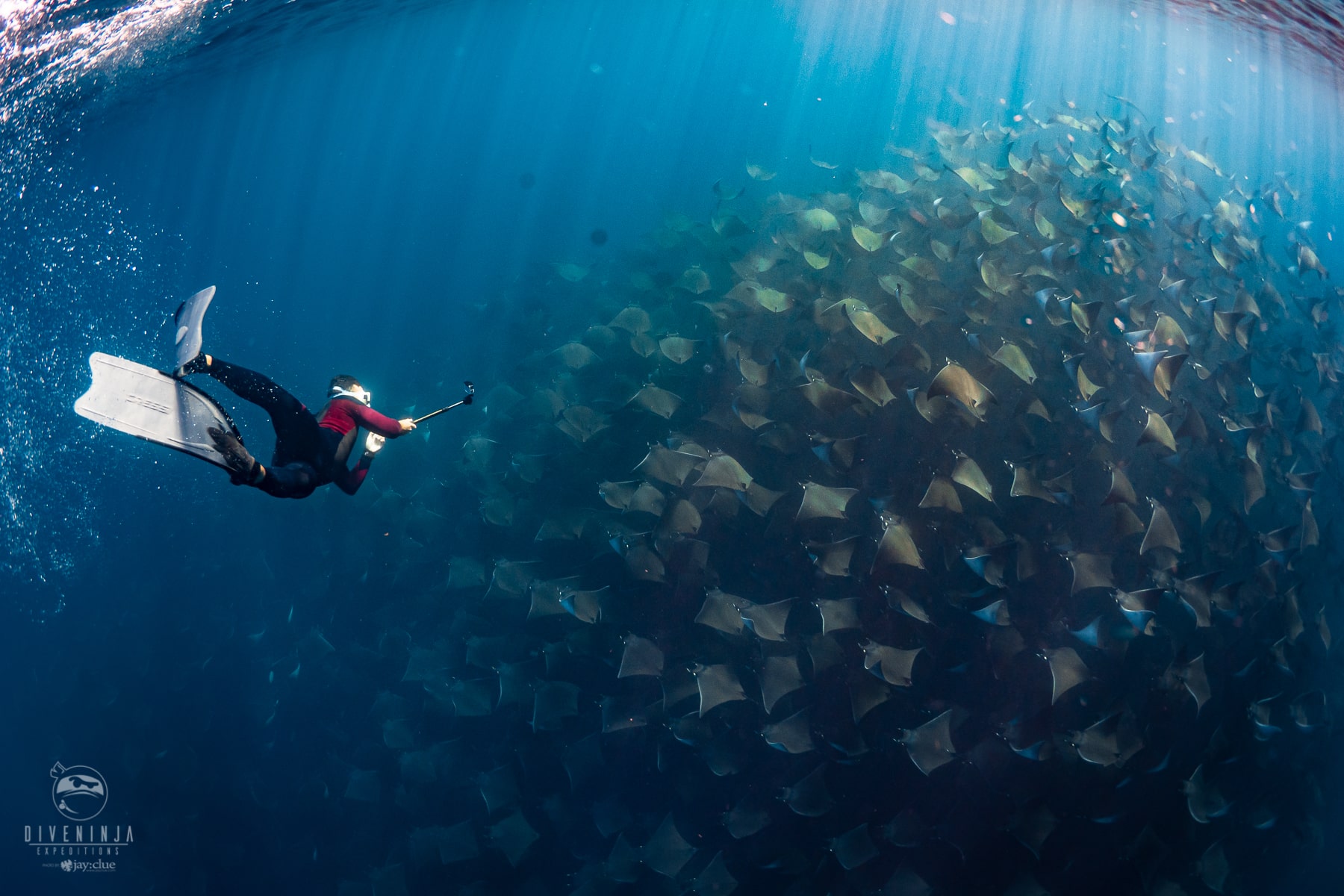 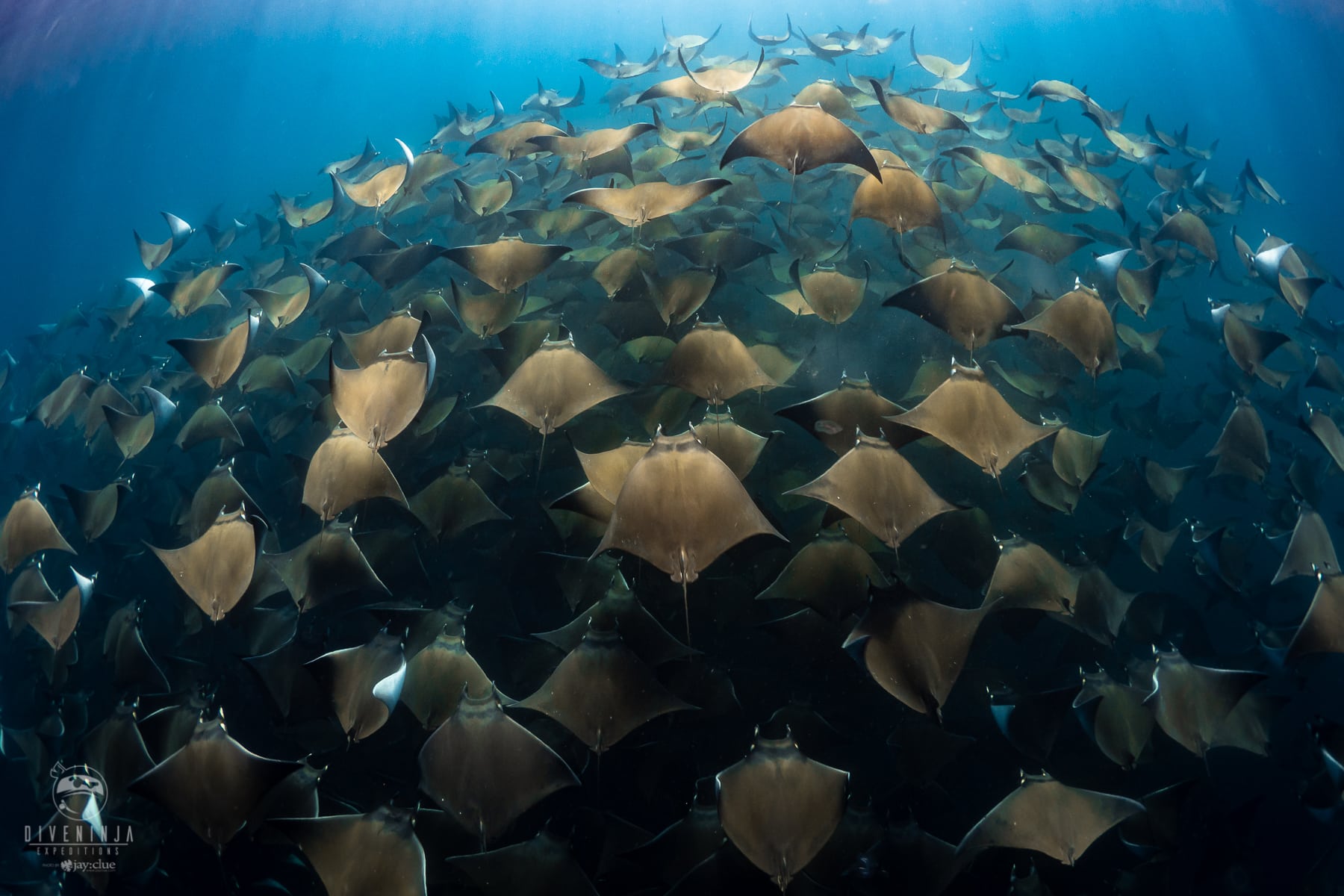 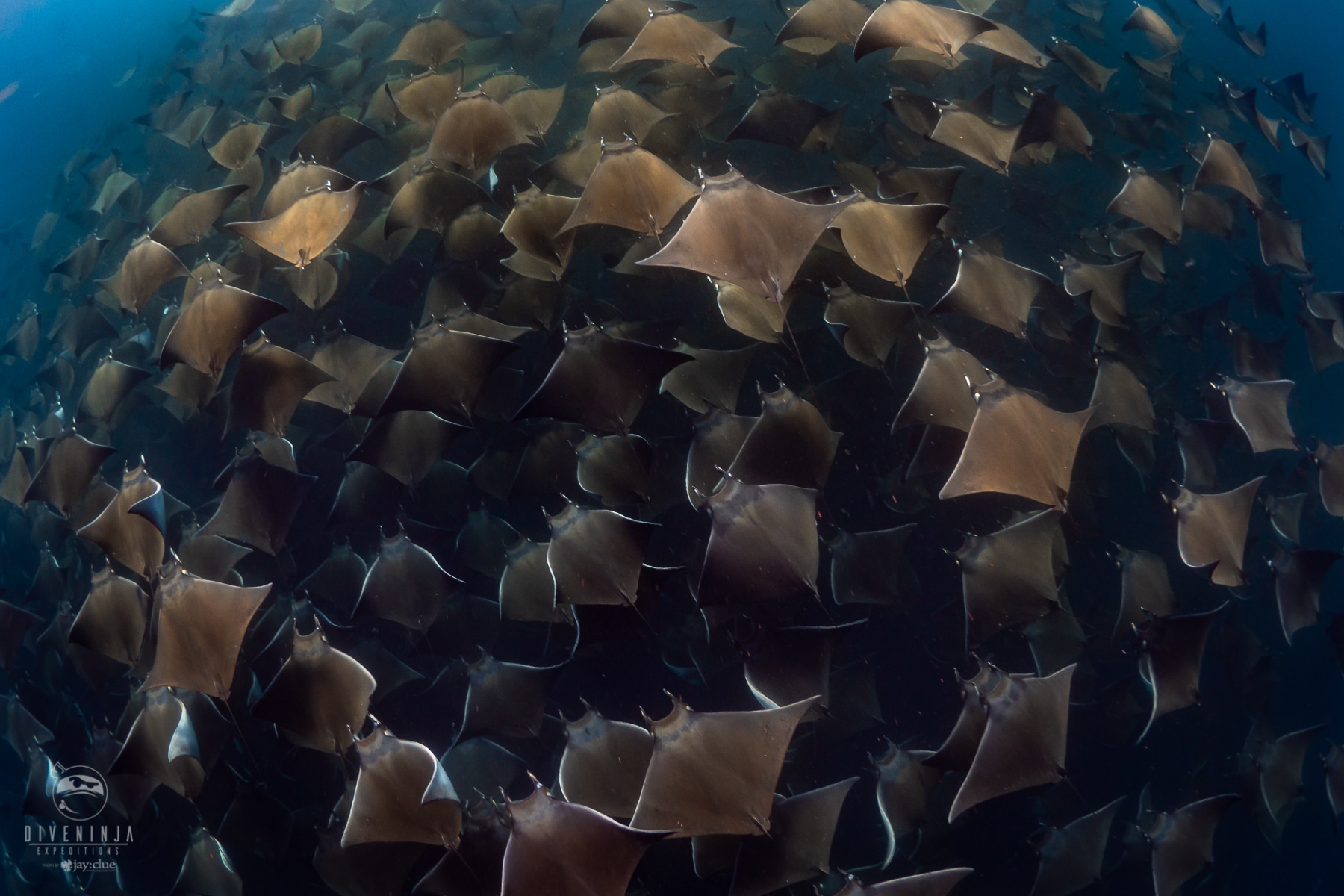 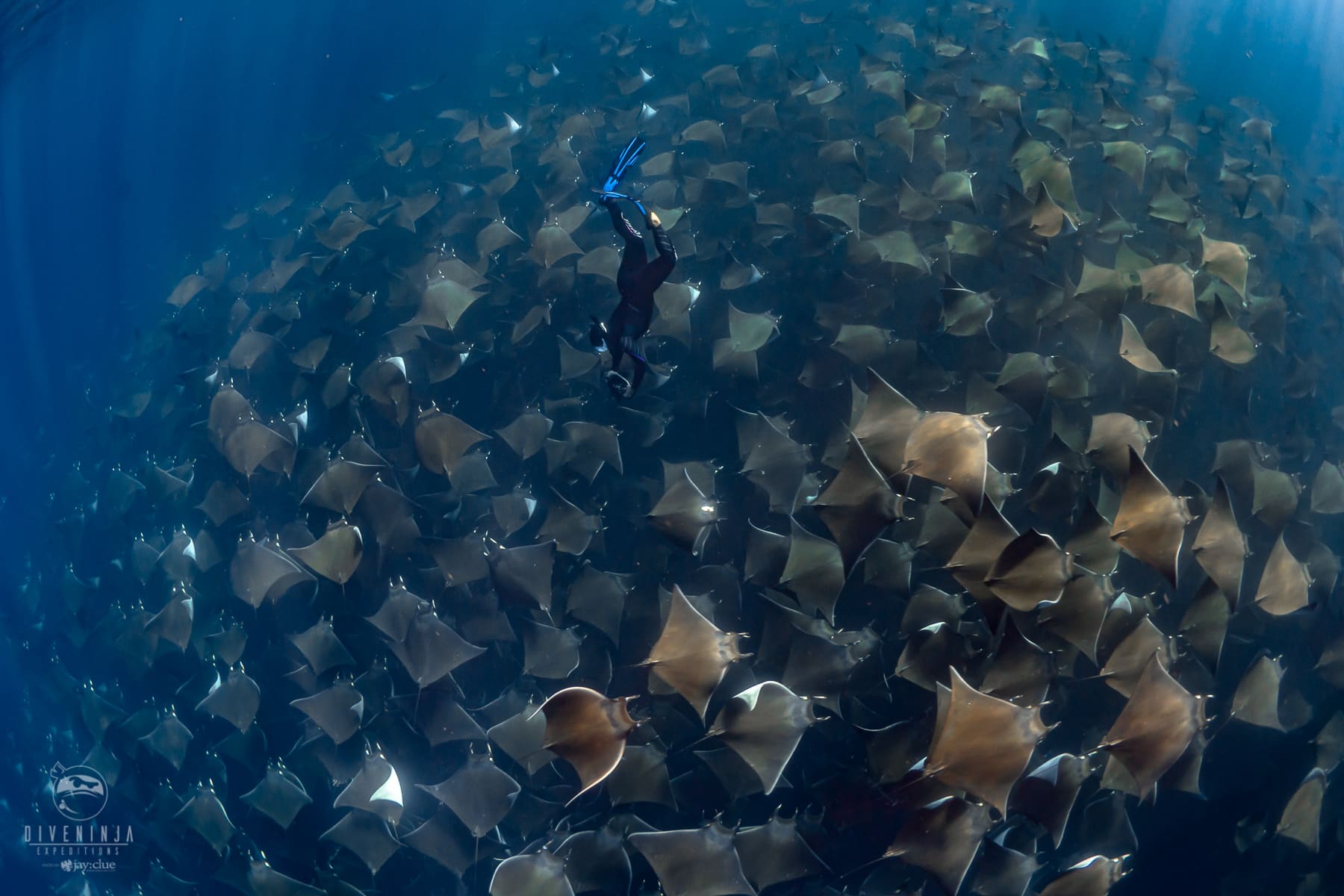 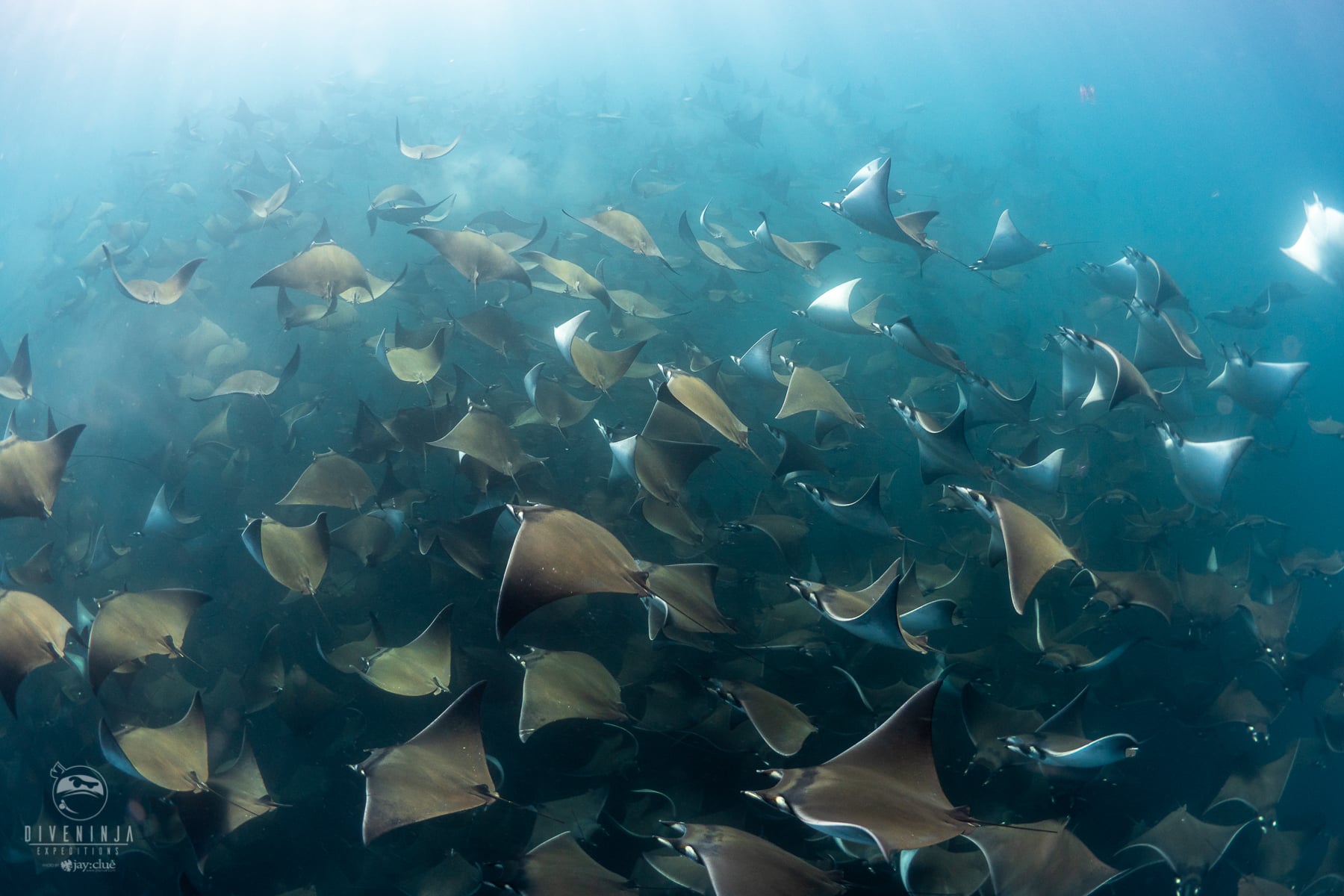 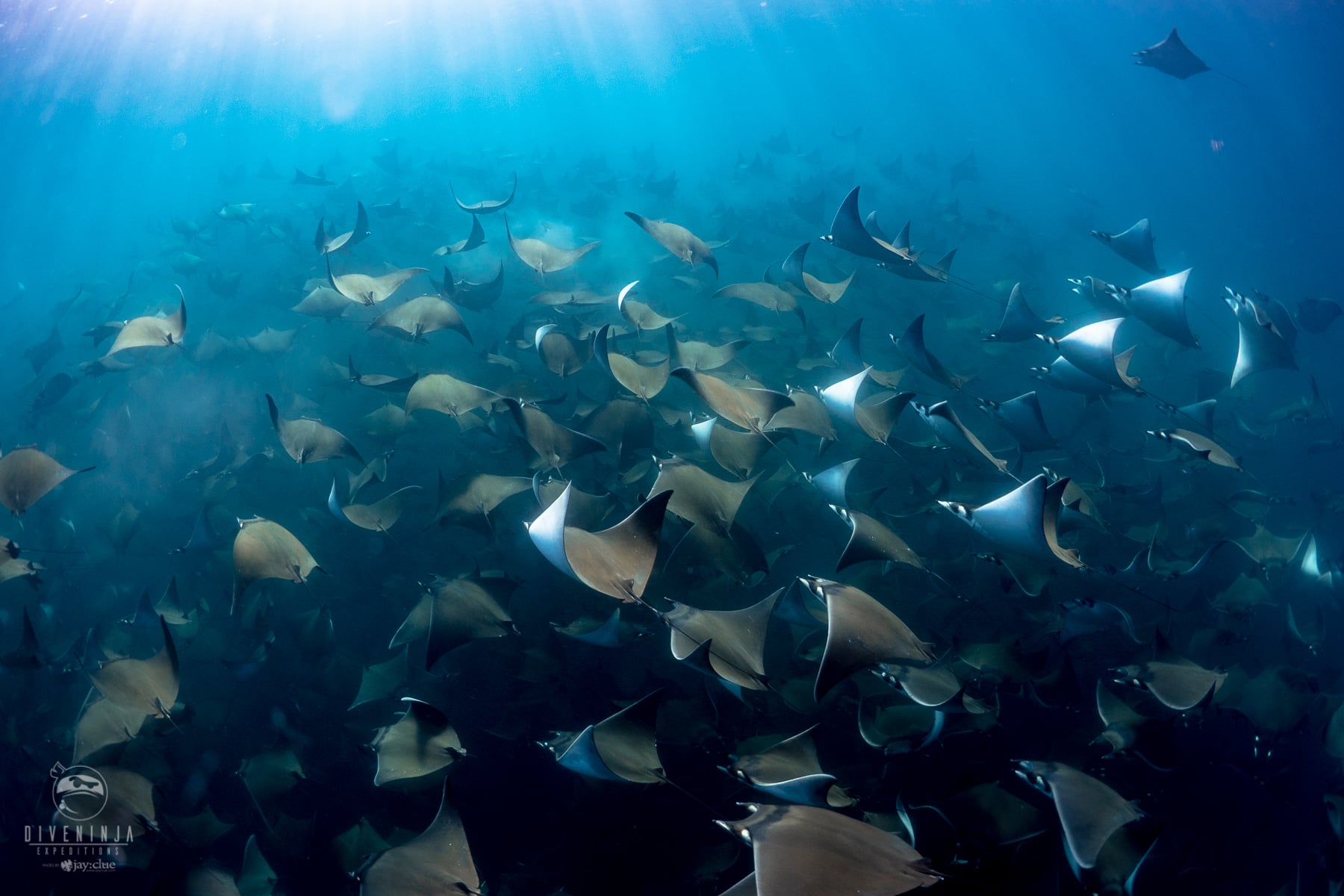 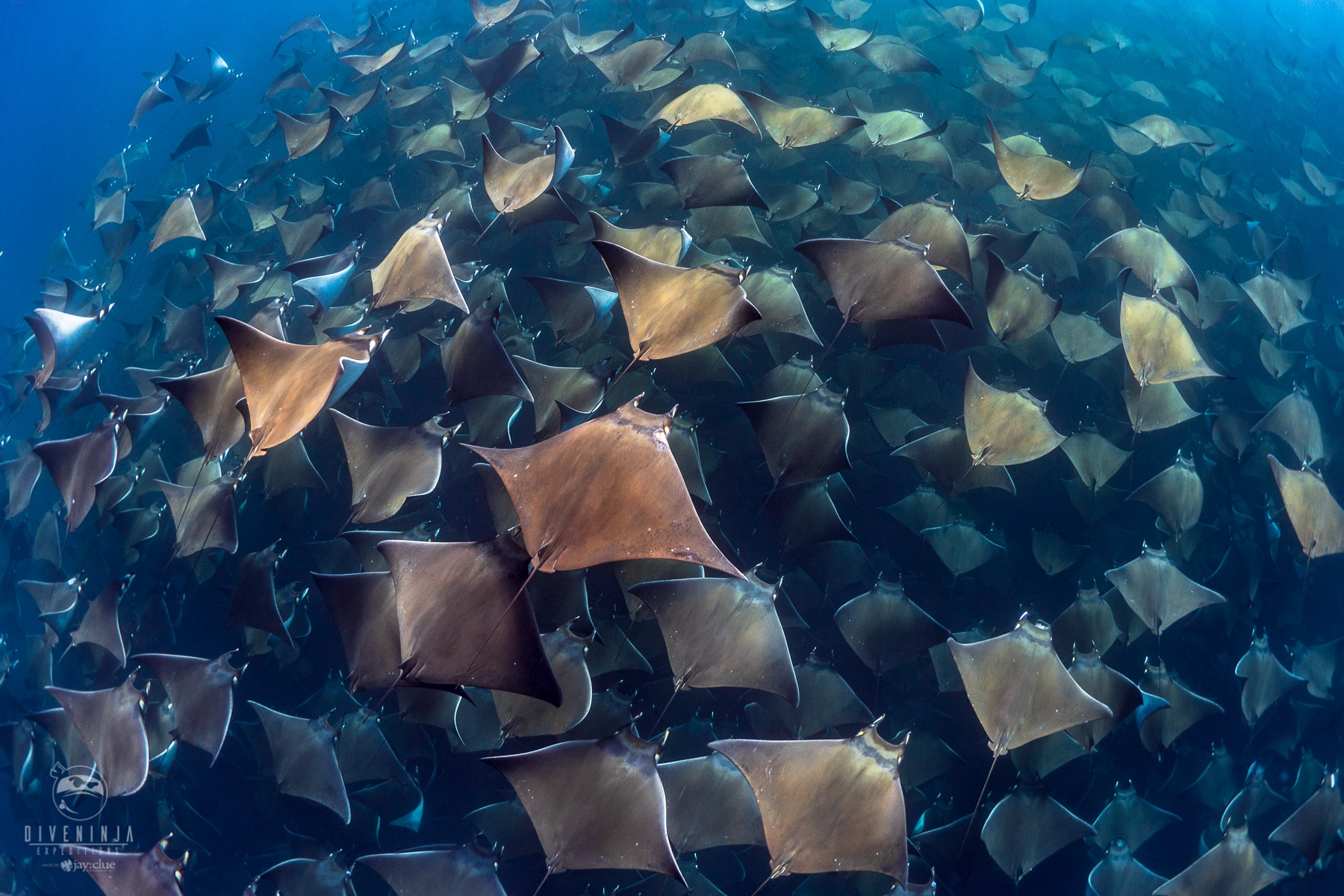 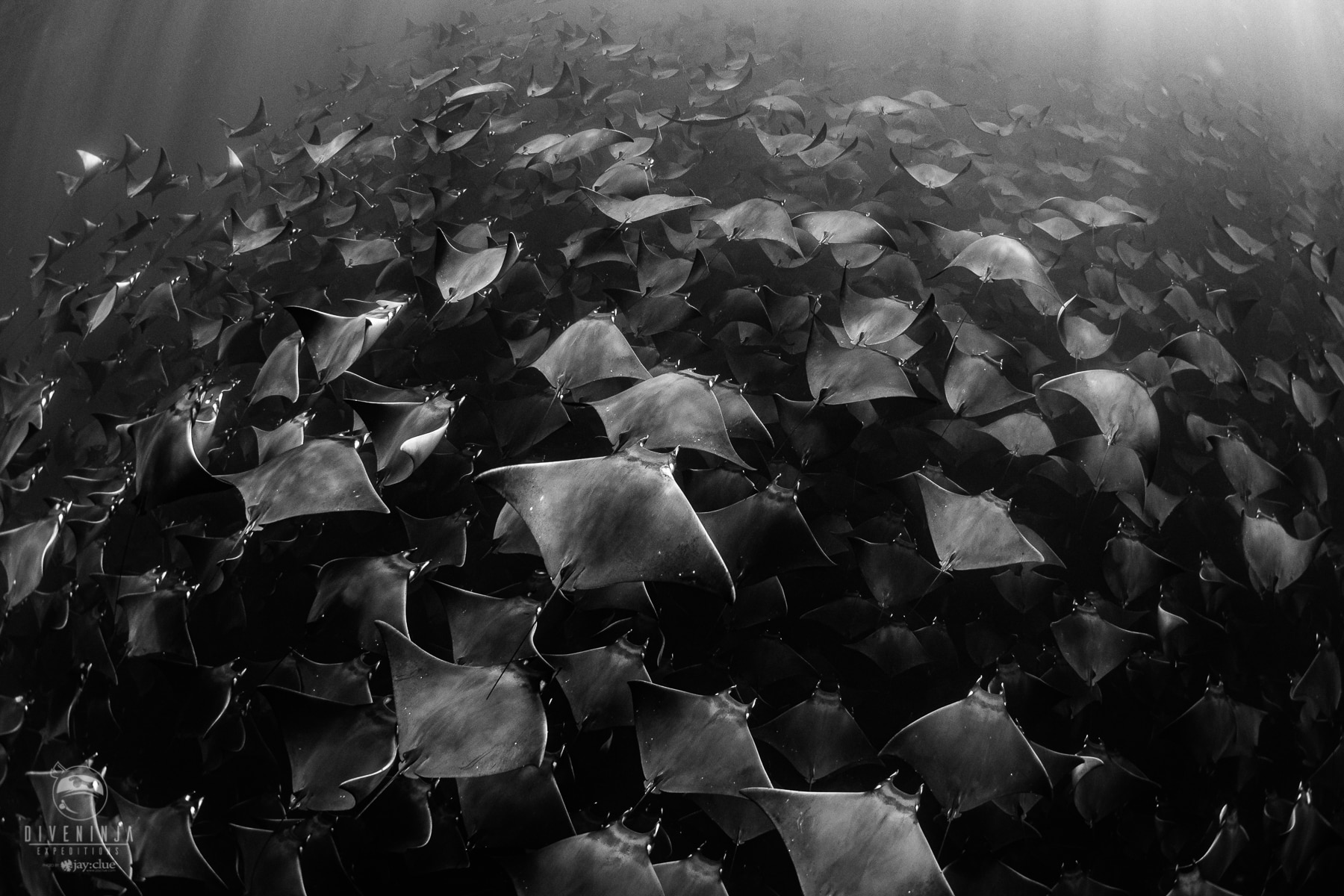 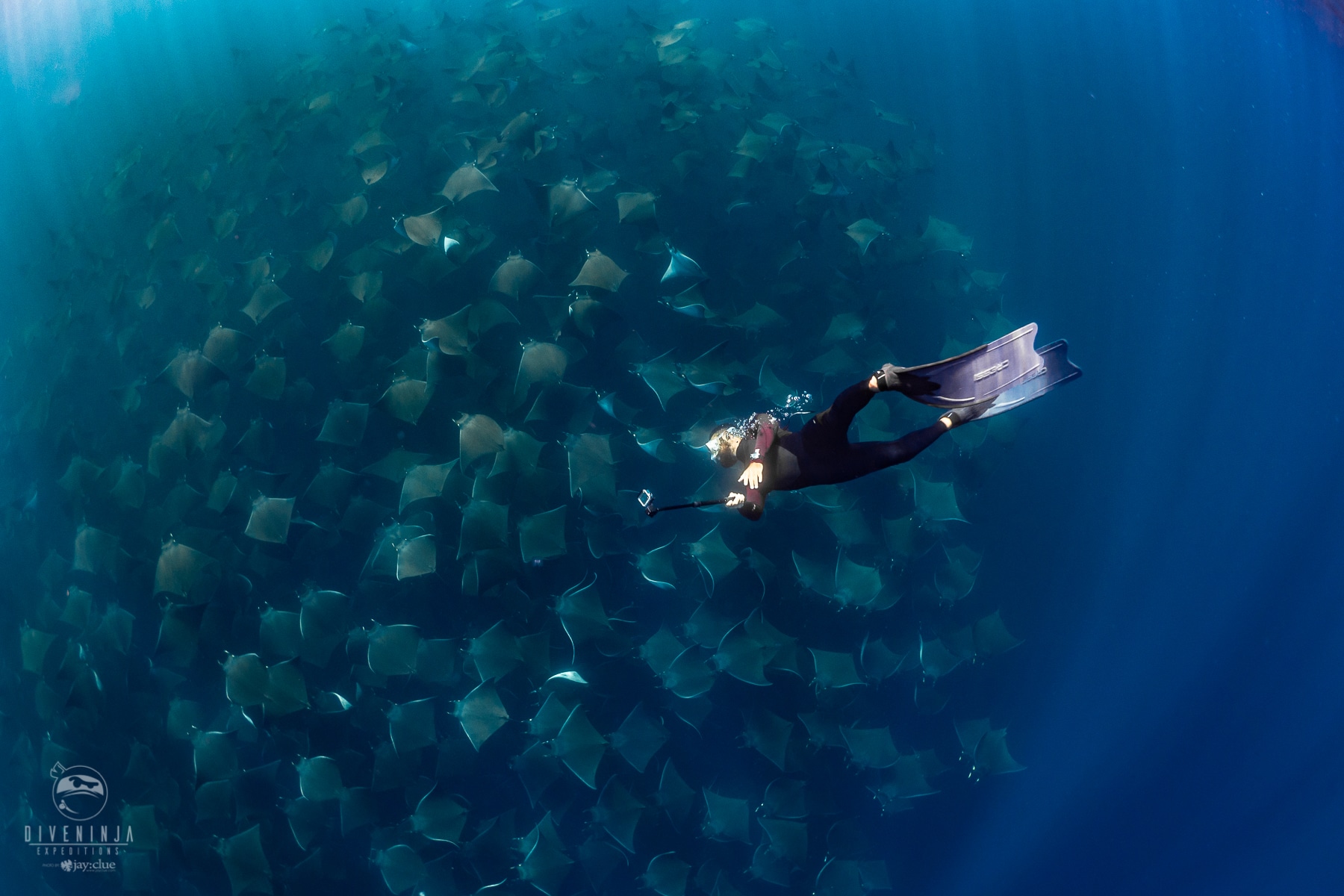 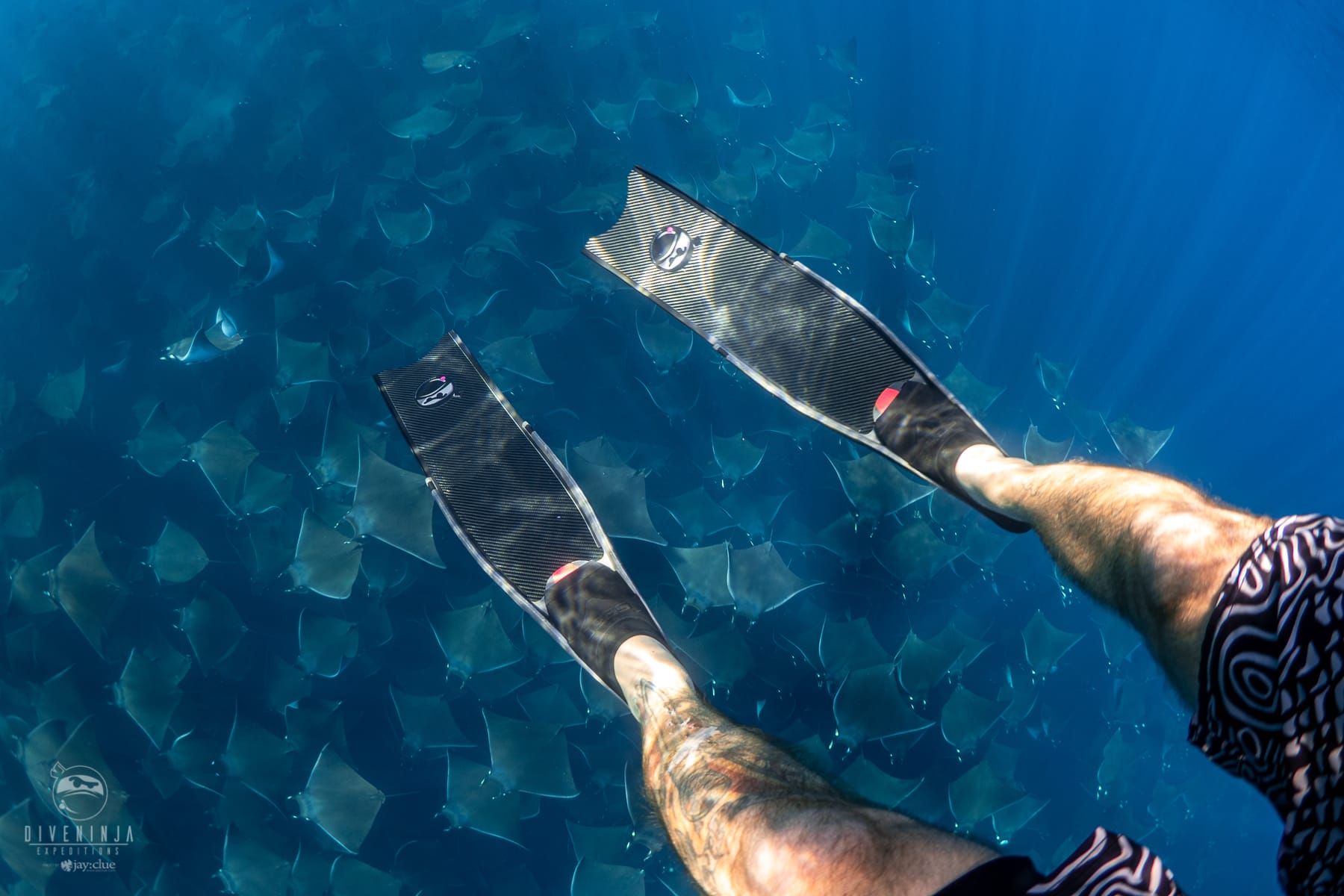 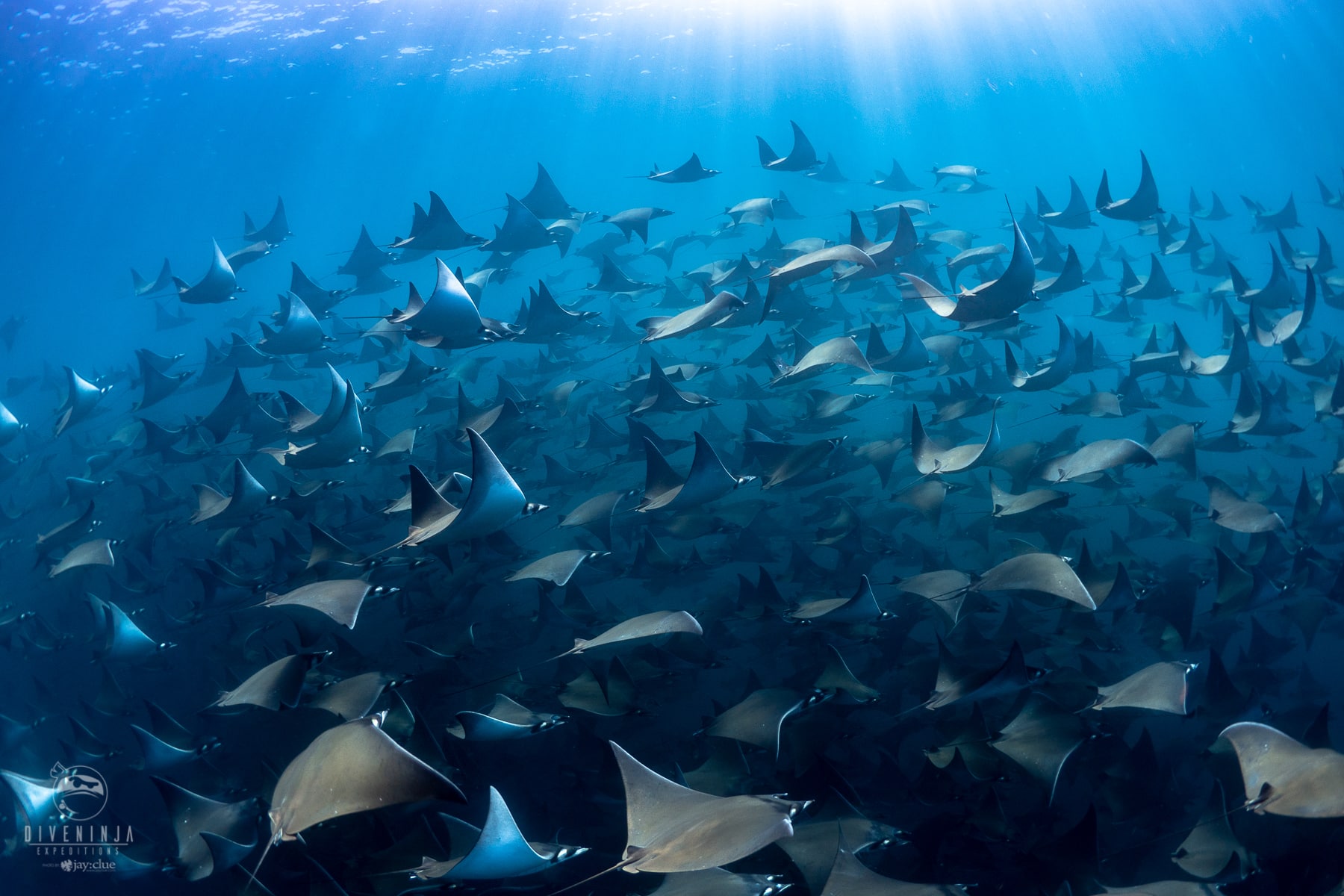 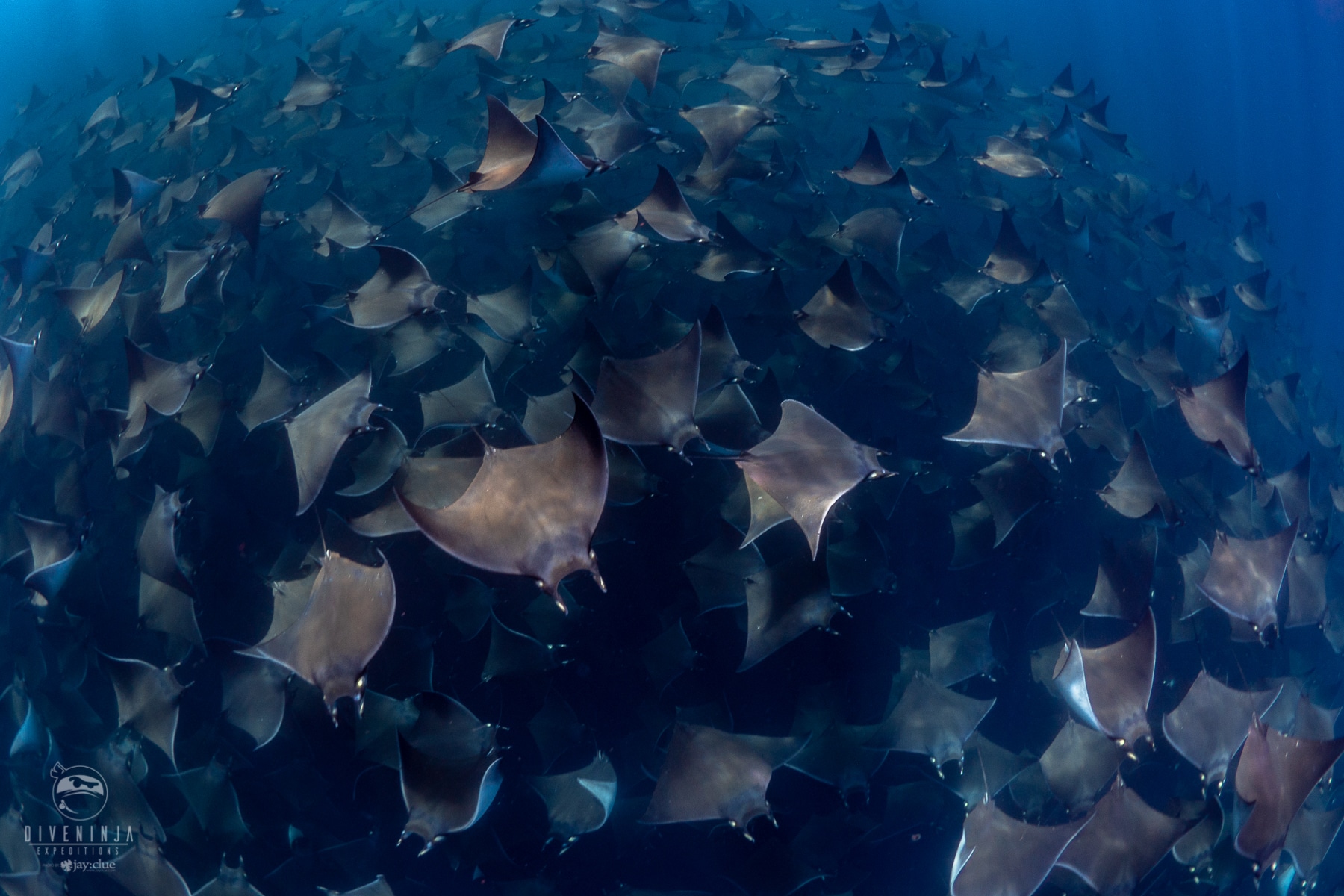 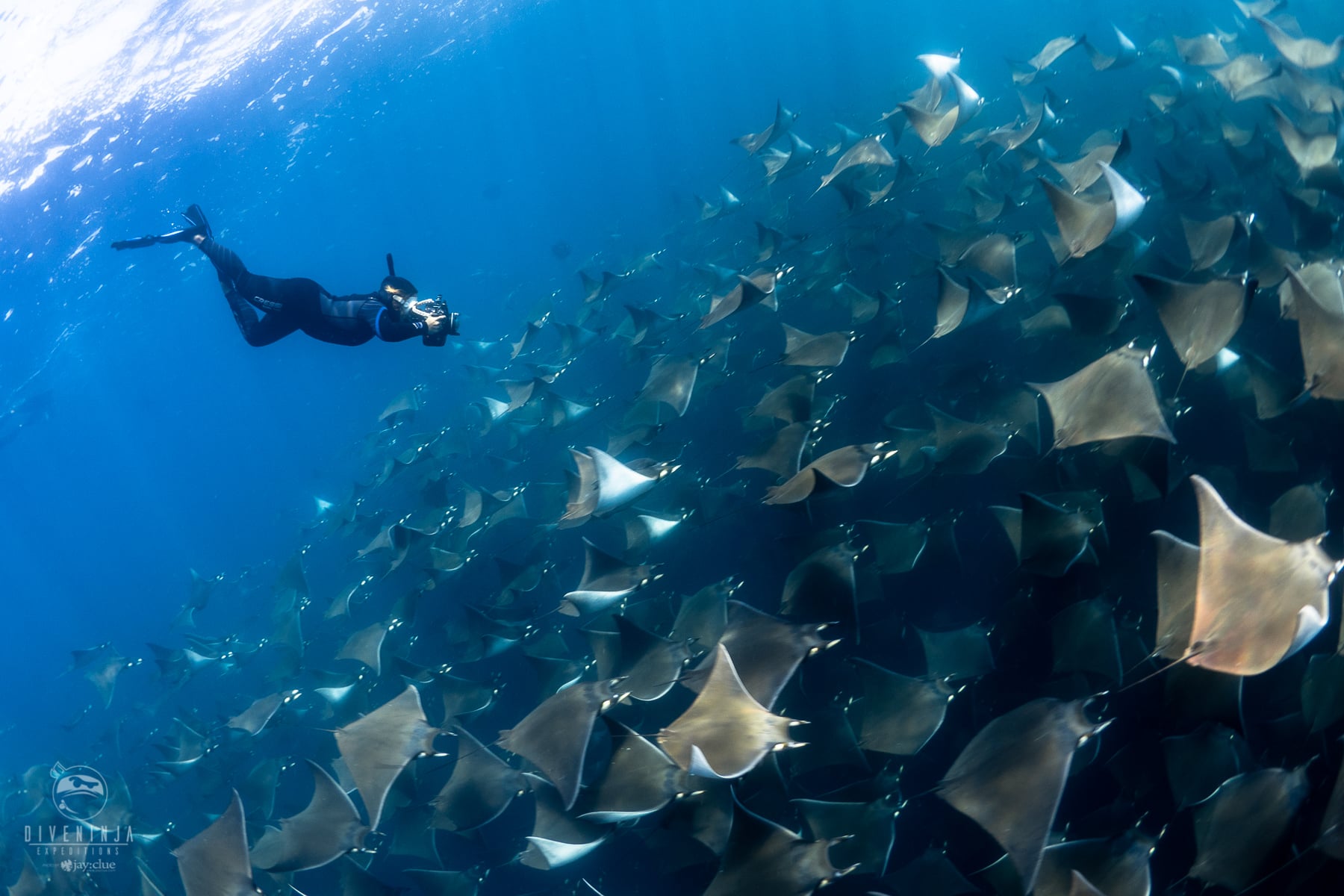 About the Author: Ninja Uno

I swear I'm not a ninja turtle, I just really love pizza.