The whale capital of the world – Baja California

Baja California is considered as some of the best places in the world for whale watching. Why? About a third of all marine mammals on our planet can be seen here at different times of the year. Humpback, grey, blue, fin, brydes, minky, sei; sperm, pilot, orca, beaked and dozens of dolphin species are just a few of the species that either live or migrate through the waters around Baja California.

All species of baleen whales, and some toothed whales, are protected by law in Mexico. Whale watching tours are very popular, and leave from different towns throughout the peninsula. It is an amazing feeling to sit in a Mexican Panga (small motorized boat), when a whale – that measures double the size of the boat, breaches just 100 meters away! Or quietly scanning the beautiful scenery of the Sea of Cortez, when you suddenly hear a huge exhalation just beside your boat! You can encounter whales almost anytime you go out on a boat, and here in Baja California the chances are some of the best! 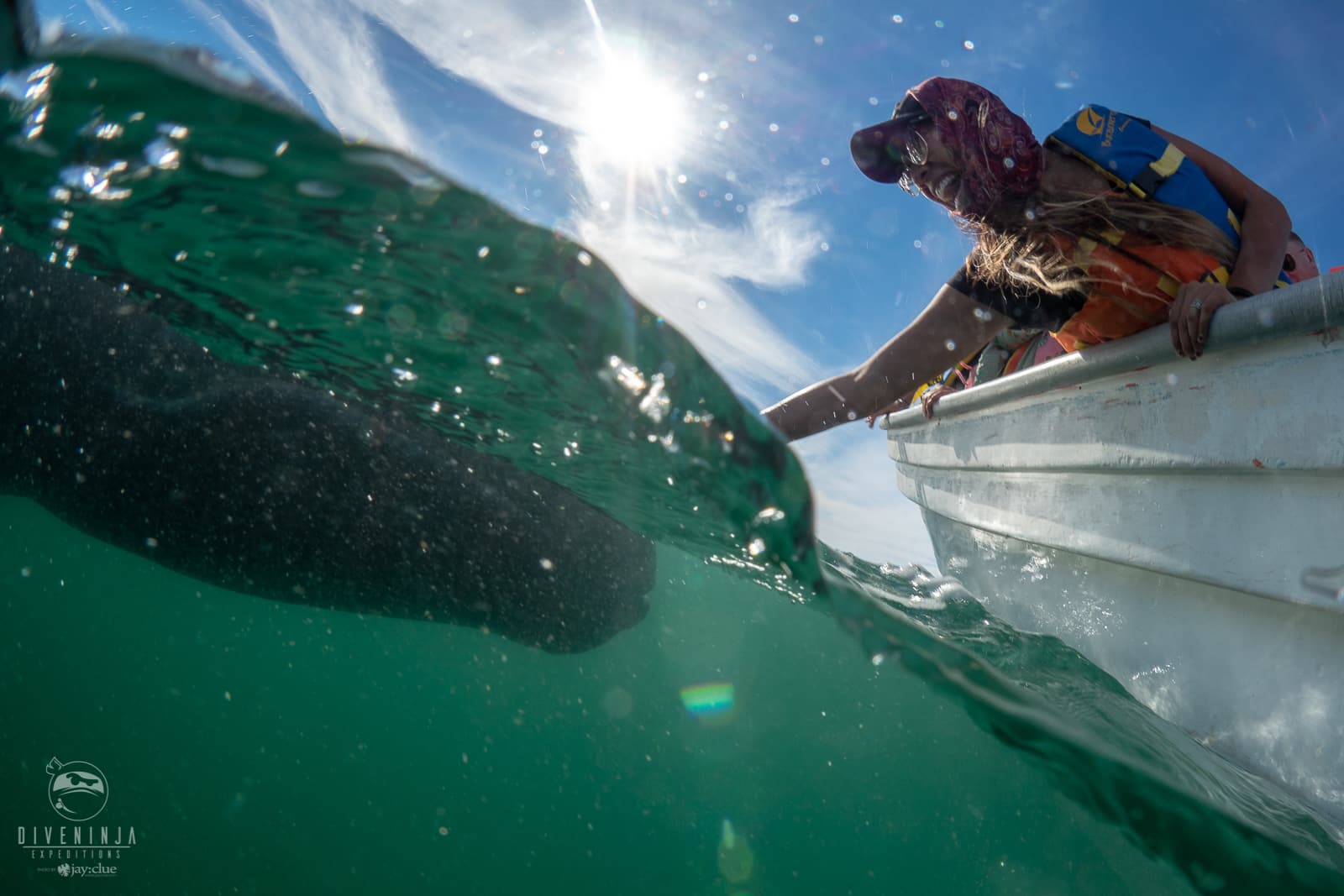 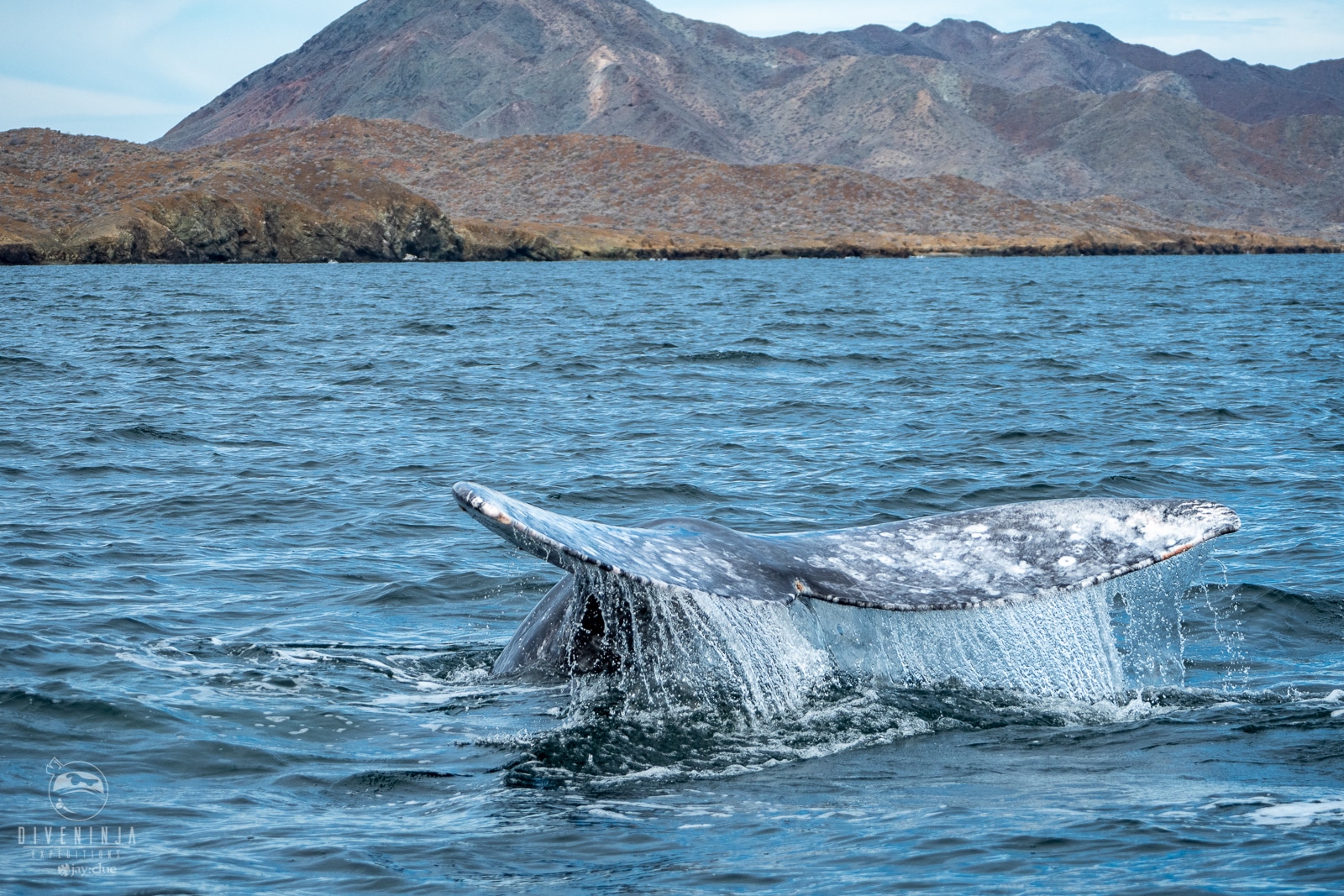 Our Favorite Whales and Tours

Here at Dive Ninja Expeditions we love whale tours, and we have been searching and scouting for the best tours and the best encounters. Seasons and water conditions are, of course, very important, and not all whales are here at the same time. Here are our top picks for whale watching tours, including the best time of year and best locations for the highest chances of encounters.

How lucky are we, to have the humpbacks pay us a visit every winter?! Although officially whale watching season starts on December 15th, we usually start seeing humpback whales off the coasts of Baja Sur already at the end of October. They come here after a long migration from the northern parts of the Pacific ocean, to find mates, give birth and rear their young. Mothers teaching their calves to swim, breach and play is the most heart-warming sight. Groups of males fighting and slamming their massive bodies into each other for the attention of a lone female whale is a thrill like no other. Listening to the song of a lone male, amplified through a hydrophone just a couple of feet off the side of the boat… there’s nothing else like it.

The best time of year to join a humpback whale watching tour is between December 15th and April 15th. Though you might be lucky, and get to see them even earlier. Dive Ninja Expeditions run 3 daily tours during whale watching season at 8 AM, 11 AM and 2 PM. Each tour is 2.5-3 hours and is guided by a knowledgeable Ninja that will help spot whales, explaining about their behavior and biology and operating the hydrophone. 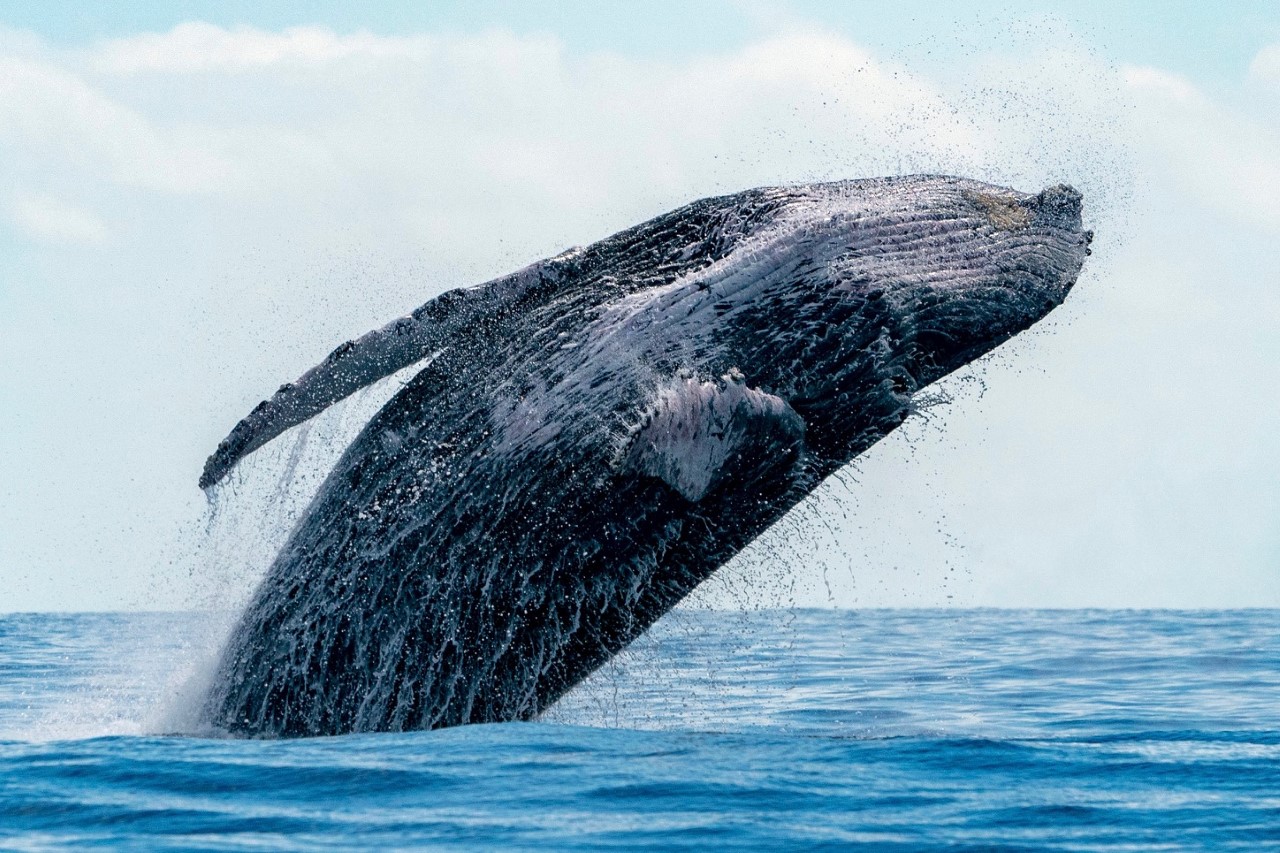 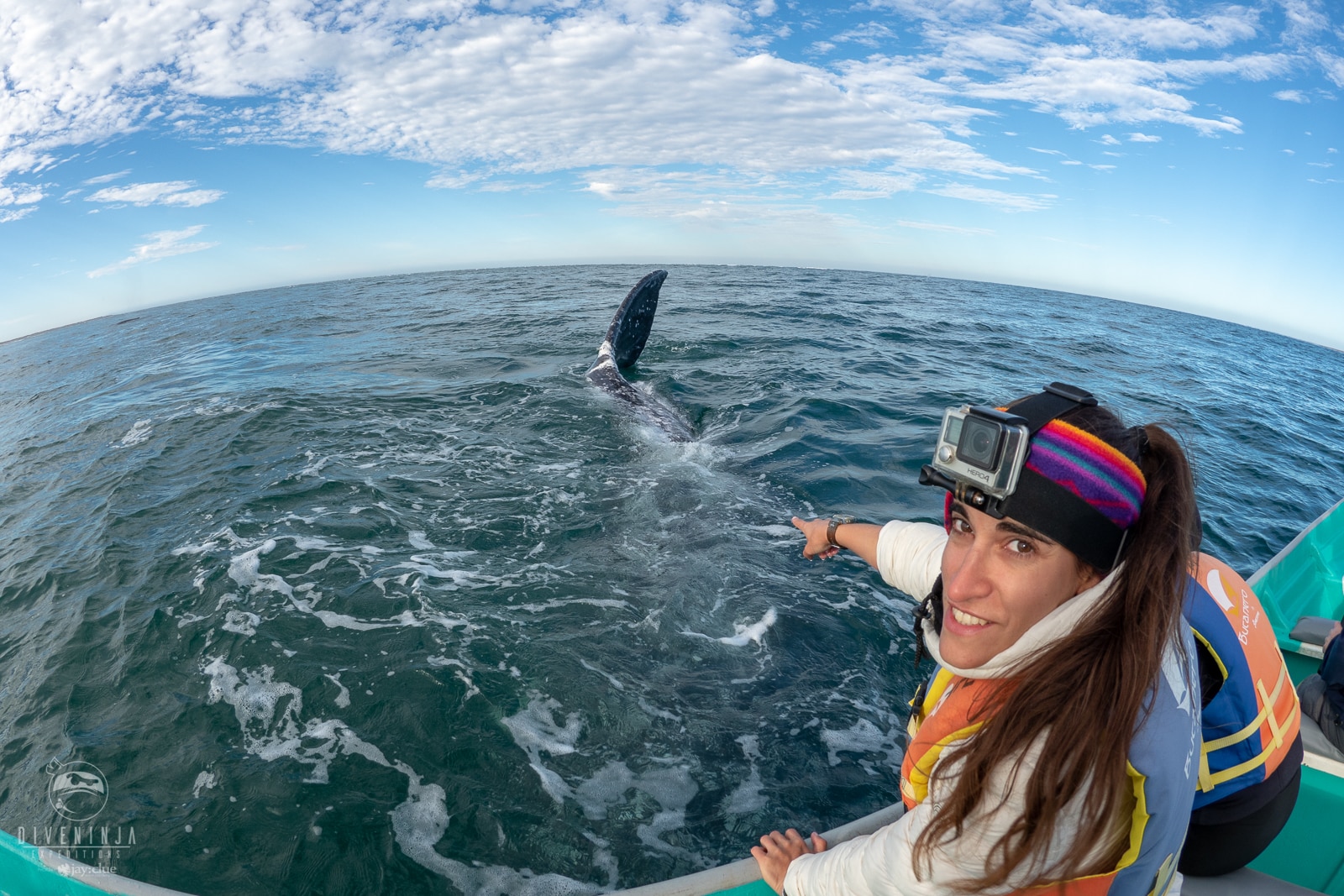 My personal favorite! Grey whales are a pretty rare sight in most parts of the world. There are barely any left in the Western Pacific and none in the Atlantic. But the west coast of North America is blessed with the last population of grey whales and we get to meet them up close and personal in the beautiful lagoons of Baja California Sur. After one of the longest migrations of any marine animal on Earth, the grey whales arrive back to Baja to have their babies and teach them the ways of the world in the safety of the lagoons. Here the mothers seem to encourage the calves to interact with humans and boats. As if showing them the wonders of life on the surface of the water. They spy-hop, spin and breach, show their fluke and fins and even come right to the side of the boat to get a close look of the little people on the boats. The calves love splashing water with their mouths, and start playing with the spectators to see who can make a bigger ruckus.

The grey whales start showing up on the Pacific side of the Baja peninsula early in January, and stay for only 3 months, until the end of March. One of the best places to see them is in Magdalena Bay located a few hours north of Cabo San Lucas. As it is about a 5 hour drive to get there, we recommend going for 2 days or more. Dive Ninja Expeditions arranges 5 day trips to see the greys in 3 different locations in the Magdalena Bay Complex, as well as private overnight trips to the area, to give you the best interactions and sightings.

More information about our Grey Whales Expeditions is coming soon!

The largest animal to have EVER existed! The blue whale is bigger than any other animal that has lived on this planet. Bigger than dinosaurs. Bigger than megalodon. Imagine having 6 of them around your small, 30’ boat, between 3 desert islands in the middle of the Sea of Cortez. The water surface is completely flat and glassy, and the loudest sound heard is the whales’ breath echoing across the ocean. The blue whales love this deep, yet protected area of the sea, near the town of Loreto. They come here every winter, and spend a couple of months with us, allowing us to enjoy this amazing experience. Their narrow and long fluke provides the best photo ops, and trying to identify each whale by the shape of it is a fun and enlightening game. The same whales return to Loreto every year, and our expert guides can tell you stories about each individual, as they already know them personally. The area and the whales are extremely protected, and the research and conservation efforts are inspiring.

For the best sightings, with the most amount of whales in the area, visit Loreto in late winter, between February and March. It is also a great time of year to see huge pods of common and bottlenose dolphins, many bird species and visit the mesmerizing Sierra de la Giganta. You can also enjoy a walk through the old town center, and learn about the history of the Spanish missionaries and the first mission in the entire Baja California peninsula. 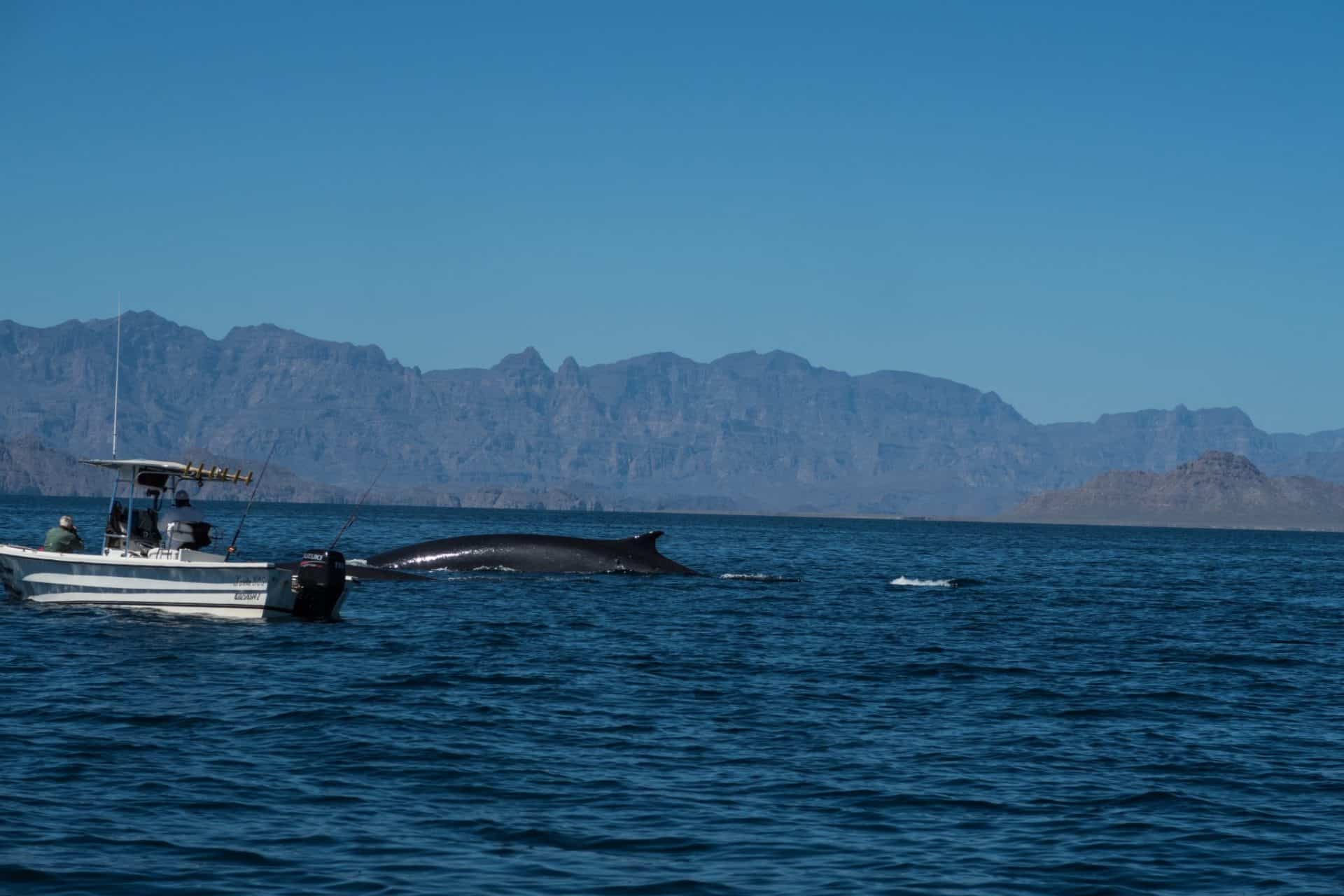 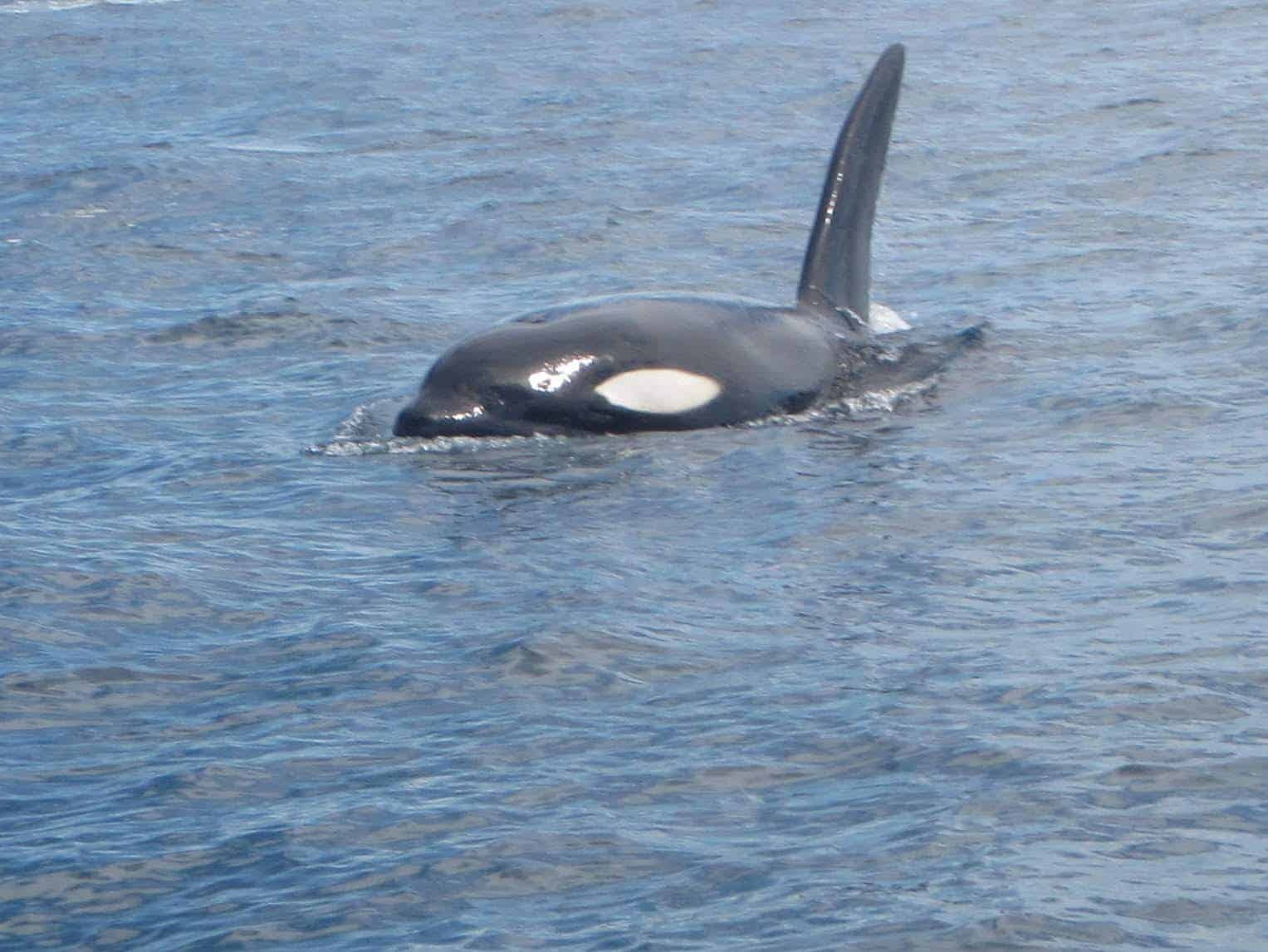 Many other species of whales call the Sea of Cortez home, or migrate around the peninsula. It is very common to see the second largest animal – the fin whales in La Paz and the area during the spring and early summer. They are local residents of the Gulf of California, and only migrate between the northern and the southern part of the Sea of Cortez. Studies have shown that the fin and blue whales tend to interact quite a lot, and it is believed that there is a small population of hybrid fin / blue whales living here too!

Sperm whales are also an exciting species we get to see every now and then. They travel around the south parts of Baja in groups of 20 – 30 individuals and can be seen sleeping on the surface, or while swimming just under it. Sightings occur mostly in the summer months, but are not frequent enough for actual whale watching tours.

Orcas, or killer whales, live here all year round too, but predicting where and when they might be seen is quite difficult. In general, wherever there’s food, you might find orcas – so, near Cabo when the humpbacks are calving (winter), inside the Sea of Cortez during mobula season (spring/summer), and out in the Pacific during the sardine run (fall). Luck plays a big factor and being in the right place at the right time is always a good idea.

We were thinking – “how can Dive Ninja Expeditions give people the best chances of seeing as many of these amazing creatures?”, and we came up with one of the greatest expeditions for whale lovers: the Gentle Giants Expedition! On this 9 day trip, you will get to experience the giants of Baja and more. We start in Cabo San Lucas for a couple of days with the humpbacks, then go to Lopez Mateos in the Magdalena Complex for a couple of days with the lovely grey whales. From there we drive to Loreto for some blue whale action, and finish up in La Paz, to swim with another type of a gentle giant – the whale shark! A road trip adventure through Baja Sur to encounter some of the most impressive animals on Earth – sounds great to me!

For more information about our Gentle Giants expeditions, click here! 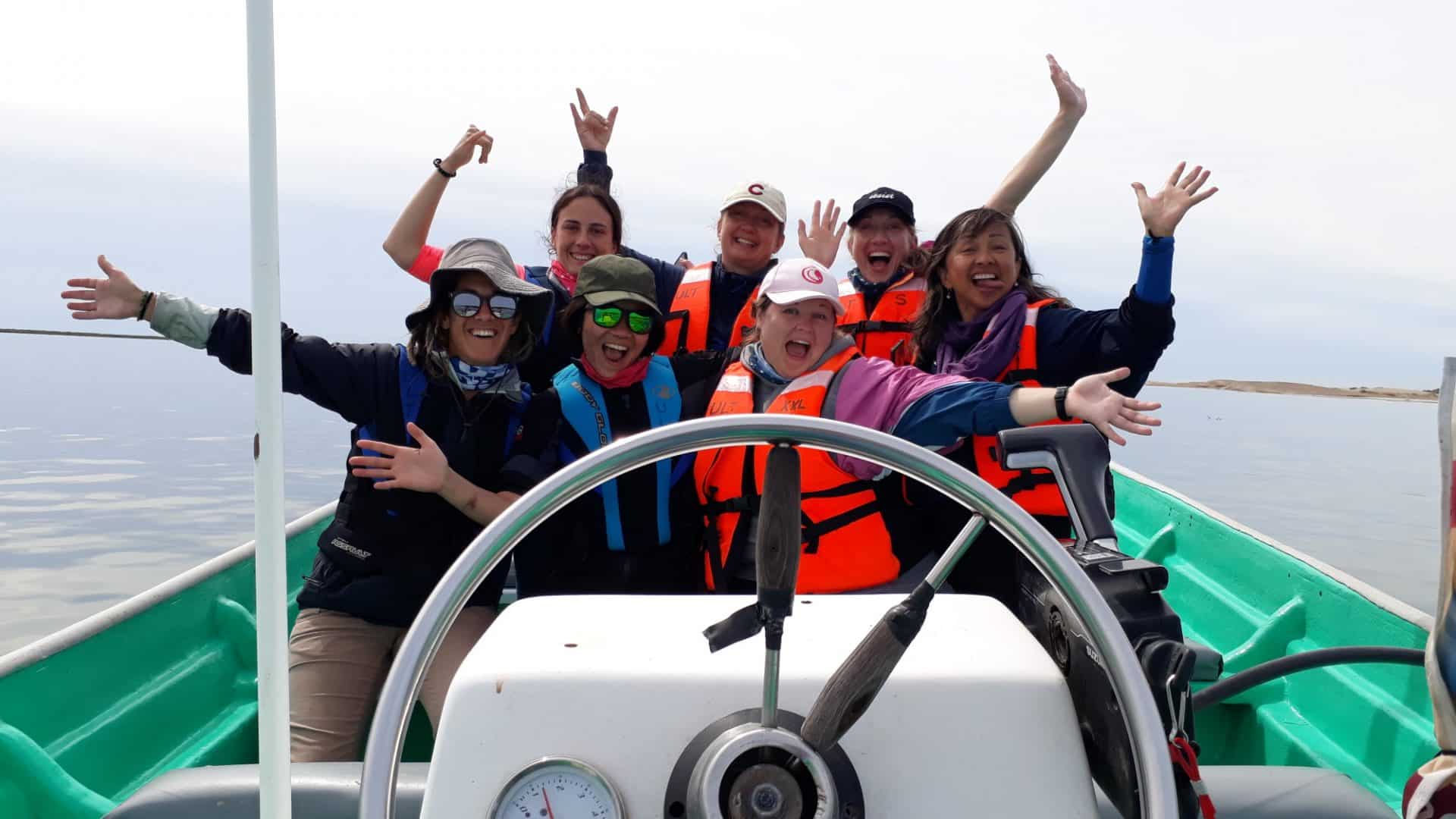 Nature and outdoors is what I love most. Animals, plants and terrain. Always seeking adventures, exploration and learning something new. Love being a Ninja Instructor and Expedition Guide and showing people the beauties of the world.
Follow Donna on Instagram

About the Author: Donna